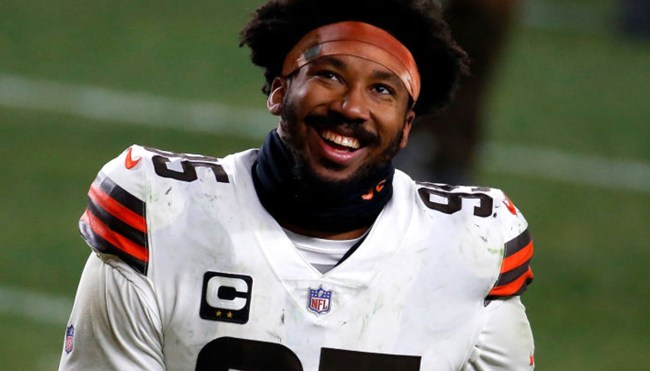 As a 30-something dude without any kids, I find it fairly hard to get particularly excited about Halloween when you consider the only thing I’ll receive from going door-to-door with a costume and a plastic pumpkin on October 31st is a visit from the police.

However, I respect the hell of out anyone who goes all-in on Halloween whenever the spookiest season of the year rolls around. I might not have the motivation an entire weekend to outfitting my place with animatronic monsters, motion-activated spiders, and enough fake cobwebs to put Shelob’s lair to shame, but I’m glad there are people out there willing to make that effort for me.

As a result, I can’t help but give credit where credit is due to Myles Garrett. According to TMZ, the Browns defensive end recently erected a creative Halloween display outside of his home in Ohio that not only features the 12-foot Home Depot skeleton that’s become the most sought-after decoration in America but a collection of gravestones featuring the names and numbers of various quarterbacks from around the NFL.

The graves feature NFL newcomers including Mac Jones and Justin Fields as well as AFC North rivals Lamar Jackson, Joe Burrow, and Ben Roethlisberger (as opposed to the Steelers quarterback who plenty of hyperbolic fans thought Garrett legitimately tried to kill back in 2019).

That’s how you do Halloween.