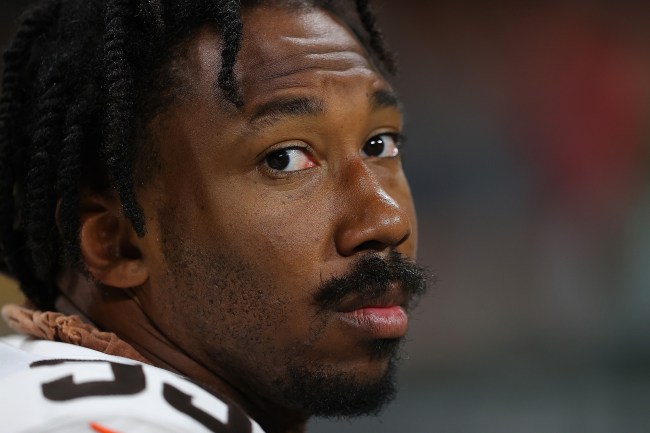 Because he is so huge, the NFL often calls him in for random drug screenings and Garrett is starting to think that it’s not a coincidence. Take Wednesday for example.

On Tuesday, Garrett posted a thirst trap Instagram from his photoshoot with Vogue. He was shirtless.

Less than 24 hours later, he got a text from somebody on behalf of the NFL. He was selected for a random PES test that needed to be completed on Thursday morning.

After not replying right away, two hours later, he got a second text that was not as kind. He was told that he needs to partake in a mandatory off-season NFL Performance Enhancing Substance test and that the collector was unable to contact him.

Typically, Garrett may not think twice about the coincidence, because it might have been exactly that. It still could be.

But he doesn’t think so.

Garrett has been randomly drug tested quite a few times in 2021 and seems to think that it has to do with him showing off how ripped he is. The first random drug test came in early October, right after he had gone sleeveless during a game.

I go sleeveless for one game and they hit me with a “you got a random drug test in the morning”🤦🏾‍♂️😂 pic.twitter.com/P3i2EMHuFD

I go sleeveless TWO TIMES and get “randomly” drug tested BOTH times… I’d try 3 for 3 but they can miss me with the blood draw 😂 not the vibe. #SleevelessMyles is retired. pic.twitter.com/sq9xiQ2sQH

Not long thereafter, they followed back up asking for a PES test. Garrett joked that the league was trying to clone him.

Yeaaa they are trying to clone me pic.twitter.com/GtR90NhV5C

Clearly, the timing of Garrett’s tests are suspicious. And he isn’t the only one raising questions.

Odell Beckham Jr. brought up the theory earlier this year.

Lolololol bro it’s been for the last 3 years ….. obviously more since I been a Ram

Regardless of whether the conspiracies are true or not, Garrett and Beckham are, at the very least, suspicious of what’s going on. Neither of them seem to believe that it’s purely incidental.