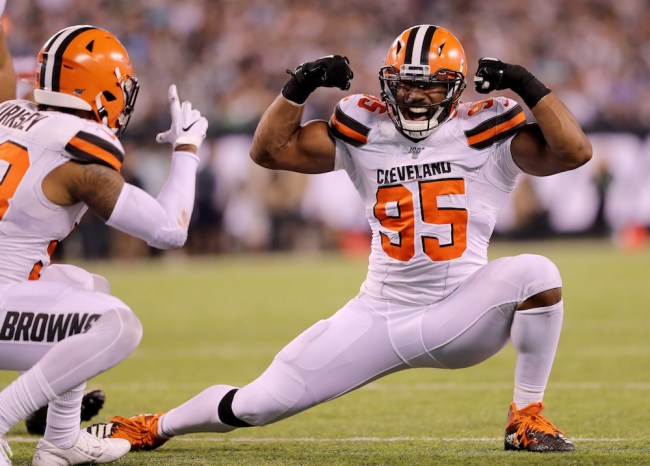 Myles Garrett is coming to the aid of a protestor who lost an eye during a peaceful protest in Cleveland.

John Sanders, a 24-year-old Black man, suffered facial injuries and lost his left eye after police fired a beanbag into a group of protesters on May 30.

A GoFundMe was set up to help Sanders with hospital bills and other expenses.

In an effort to spread the word about the fundraising effort, Garret tweeted the link out to his 211K followers.

John Sanders was peacefully protesting in Cleveland when he got shot in the eye with a lead pellet filled beanbag. After a couple surgeries, they had to remove his eye. If you can donate, here’s his go fund me (directly from him). https://t.co/wF7RuXzmuM

Garrett then personally reached out to Sanders.

“He was just texting me about how badly he felt about what happened and how he wanted to make a difference in any way he could,” Sanders told TMZ Sports.

“It’s wild,” Sanders added. “I mean, the whole thing—from being such an extreme living example of police brutality and lack of training to actually having someone in the NFL that is not only probably the best player at their position, but also someone I’ve held in high regards actually reach out to me—is really overwhelming. To help me? Never happens to me. I’m overly thankful.”

Sanders told TMZ the GoFundMe donations doubled in the days following Garrett’s tweet and now more than $17,300 raised so far.

The 24-year-old said he’s a long way from recovery but is grateful to have a guy like Garrett in his corner.

Garrett might be trying to spread the goodwill throughout Cleveland.

The Cleveland Browns are in negotiations with the star defensive end on a massive contract extension that could make him the highest-paid pash rusher in the league.