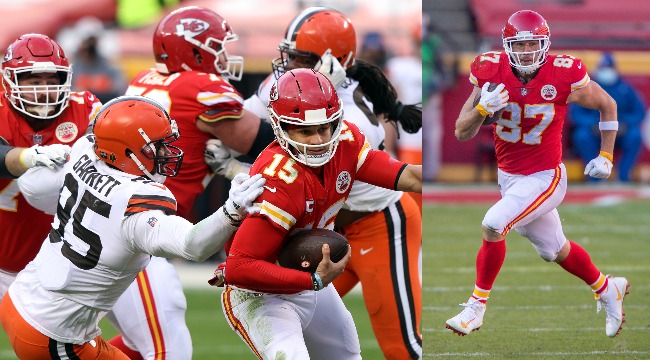 I choose to believe that no defensive player, aside from maybe Ndamukong Suh, is genuinely happy to see an opposing quarterback stumble off the field with the stability of a high schooler exiting the limo for junior prom after guzzling a Poland Springs bottle of Captain Morgan.

But after Patrick Mahomes suffered a concussion mid-way through the third quarter in Sunday’s divisional round, Travis Kelce claimed the Browns defense was overjoyed with the mild traumatic brain injury.

Patrick Mahomes is back in the locker room after taking a hit.

“You never wanna say that someone purposely took somebody out the game. But they were flying around, and after the initial hit, they were fired up, saying, ‘that’s what we do; that’s what we do.’ So it’s just, there was a lot of talk between me and their players. For the most part, it was just in a competitive mindset. I do feel like those guys are good dudes, and I respect a lot of them for that, especially Myles.”

In response to Kelce softly calling the Browns integrity into question, Myles Garrett employed his best Boy Scout impersonation when describing his Browns defense as nothing but fun-loving Christians who Respect Their Opponent.

“I want to say that nobody on our team is head hunting, going after guys or trying to hurt a guy, no matter how good he is,” Garrett said, per Daryl Ruiter of 92.3 The Fan. “We are praying for [Mahomes’] recovery and praying for his success. He has always been a quality guy and the way he does stuff for the community. He is a leader on and off the field that you appreciate seeing, especially from a guy of that caliber and just always trying to be a positive force everywhere he goes.”

Here is where it gets a little too paddy-cake for me.

“Some of the guys felt like that,” Garrett said. “I know Travis felt like that, and I am cool with Travis. He is a good guy. Hung out with him a couple of times in the offseason. I don’t ever want him to feel like my guys or my team is out here trying to injure somebody or put them out of the game.”

Come on, Myles. Kelce not only beat your team, but he broke the unwritten rules of football and exposed on-field dealings to the salivating media. And it’s cool because you’ve chilled with him a couple times?

An alternative response would be: “I am cool with Travis. He is a good guy. Hung out with him a couple of times in the offseason. Can’t imagine why he’d betray me like that. Dick move.”

The people want drama. FEED US THE DRAMA.