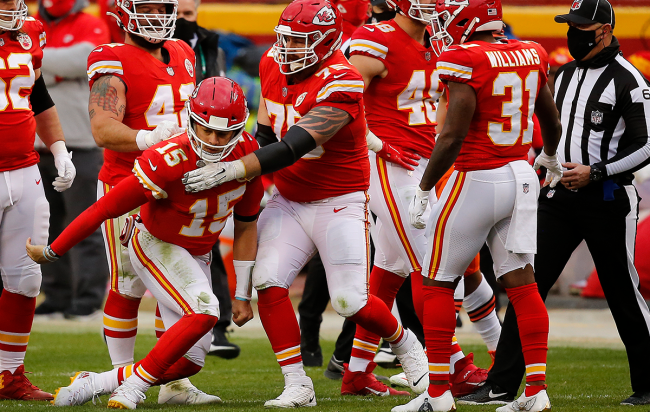 The Cleveland Browns hadn’t won a playoff game in 26 seasons before beating the Steelers in their wild card matchup to earn a spot in the AFC Divisional round for the first time since 1989, but they faced a tall task heading into Sunday’s contest against the Chiefs thanks in no small part to the talents of Patrick Mahomes.

Despite only having three real seasons of NFL experience under his belt, Patrick Mahomes has already established himself as one of the best players in the league, and while Baker Mayfield has helped turn things around in Cleveland, it’s safe to say Kansas City had the advantage in the quarterback department heading into the game.

However, that all changed around the midway point of the third quarter when Mahomes had trouble standing up after getting tackled by Mack Wilson before officially being knocked out of the game when he failed to clear concussion protocol.

The Chiefs were up nine at the time, but it goes without saying that this was a massive momentum shift, as the Browns slowly but surely clawed their way back against a Kansas City team that had to put its faith in the arm of Chad Henne, who came through in the clutch and helped punch their ticket to their third-straight AFC Championship showdown much to the delight of their sidelined superstar.

While Mahomes may have been understandably amped, plenty of people were less than pleased with the series of events that led to Henne having to step up—including the mother of the injured QB, who called out an “evil” Wilson for the hit that led to her son getting taken to the locker room.

It’s safe to say she probably wasn’t thrilled with what Travis Kelce said after the game, as the tight end shed some light on the play while speaking with reporters and claimed multiple Cleveland players started celebrating when they realized Mahomes had gone down. Kelce stopped short of accusing his opponents of deliberately attempting to injure Mahomes, but it’s pretty clear he wasn’t pleased with their behavior.

and their players. For the most part, it was just in a competitive mindset. I do feel like those guys are good dudes, and I respect a lot of them for that, especially Myles." (end)

When I was a kid, I played on a Little League team that lost 13 straight games, and when we finally walked away with a virtually meaningless win, we celebrated like we won the World Series before our coach reminded us to “act like we’ve been there.” However, much like the Browns, it’d been a while since we had something to celebrate, so while this definitely isn’t the best look, I can sort of understand how emotions could’ve gotten the best of some of their players.

It’s still unclear if Mahomes will be ready to go when the Chiefs face off against the Bills, but based on initial reports, it looks like Henne won’t have to be the hero next week (but with that said, #HenneThingIsPossible).