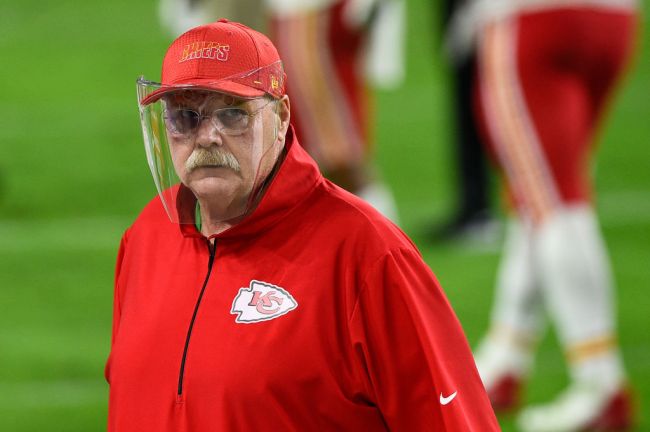 Kansas City faced a fourth-and-inches with just over one minute remaining in the AFC Divisional round and had a chance to run out the clock with a first down. Andy Reid called game. As the Chiefs set up at the line of scrimmage, the expectation was that they would let the time tick down and take a timeout before the play clock hit zero. Even Tony Romo, calling the game for CBS, was discussing how there was no chance they would go for it. He believed that the intention was to try and draw the defense offside before taking a timeout to then punt. Instead, the Chiefs set up in the shotgun and snapped the ball at the five-second mark. Romo, the defense and everyone watching were surprised, and a screen pass to Tyreek Hill moved the chains to seal the victory.

"Only Andy Reid gets in shotgun on 4th and inches and throws the ball with his backup QB…HE SHOCKED EVERYBODY!" – @tonyromopic.twitter.com/JSBCFo1RfT
(via @NFL)

To make the decision even more gutsy, it was backup quarterback Chad Henne under center after Patrick Mahomes left the game with a concussion. Henne, a 13-year NFL veteran, set up the attempt with a critically-important scramble on third down. It was an incredible, all-out effort to pick up 13.5 of the 14 yards and Reid wouldn’t have even had a chance to make his decision without him.

Henne was jacked a rightfully so. However, the spot was reviewed and it was deemed short, which led to the fourth down attempt.

With the win, Kansas City is set to host its third-straight conference championship, becoming only the second team to do so. The Philadelphia Eagles hosted back-to-back-to-back NFC Championships from 2002 to 2004. That team was also coached by Reid.

Players, coaches and fans all weighed in on Reid’s decision. Many of them had the same theme.

ANDY REID SAID FUCK IT I’M A MADE MAN ANYWAY

That is a dirty play call by Andy Reid wauw

Andy Reid after making that 4th down call with his backup QB #CHIEFSKINGDOM pic.twitter.com/P4wrBvR5VV

Let's go ahead and spend the next 3 days making references to the size of Andy Reid's balls. I still can't get over that play call.

ANDY REID YOU BRAVE, BEAUTIFUL SON OF A GUN.

The Chiefs will face the Buffalo Bills with hopes of returning to the Super Bowl on Sunday with Romo and Jim Nantz again on the call for CBS.