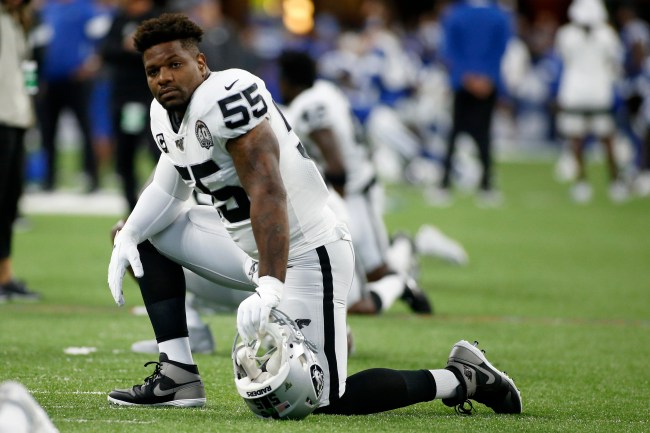 INDIANAPOLIS, INDIANA - SEPTEMBER 29: Vontaze Burfict #55 of the Oakland Raiders on the filed before the game against the Indianapolis Colts at Lucas Oil Stadium on September 29, 2019 in Indianapolis, Indiana. (Photo by Justin Casterline/Getty Images)

On Thursday night, Garrett lost his cool and swung a helmet at Steelers QB Mason Rudolph’s at the end of the Browns-Steelers game. Garrett has currently been suspended indefinitely but many believe he’ll get a six-game suspension.

myles garrett rips mason rudolph’s helmet off after the play & hits him with it pic.twitter.com/uGRn0CXSDN

In all from the NFL:
— #Browns DE Myles Garrett suspended without pay indefinitely, at least the rest of the season.
— #Steelers OL Maurkice Pouncey suspended 3 games and fined
— #Browns DL Larry Ogunjobi suspended one game and fined.
— Other players involved may be fined.

Burfict, who is currently serving a season-long suspension for a hit on Colts’ TE Jack Doyle, spoke with Vic Tafur of The Athletic and was critical of Garrett’s actions by saying that swinging a helmet “is not a part of football”.

Vontaze Burfict’s many on-field infractions with the #Bengals and Raiders led to his suspension this season. But as he tells @VicTafur in an exclusive candid interview, he doesn’t want to be compared to Myles Garrett’s situation. https://t.co/1GeRQtAYbe

Via ESPN, The Athletic

“The NFL had to suspend somebody for that last night since that wasn’t a football act,” Burfict told The Athletic. “My suspension was a football act. I was hitting somebody. I wasn’t taking a helmet off and swinging it at somebody.” Burfict told the site he was watching the game with his daughters, ages 4 and 2, and turned the game off after the fight.

“I don’t want them to see that,” Burfict said. “Because that’s not what I do. That’s not part of football. I hit people on the field during the game. And they say that’s dirty, yeah, whatever. I get hit, too, during the games, so don’t complain. It’s football, bro.”

Burfict goes on to blast the NFL and Roger Goodell for giving him such a long suspension for a “football play”.

“It was bullshit,” Burfict said of the discipline for his hit on Doyle. “I was making a football play. I could see if it was a fine or something, but not a suspension, let alone for the whole season. It kind of seems like there was a target on my head. I mean, there has always been a target on my head.

“I met Roger Goodell in New York and he was a total bitch” Burfict said. “He was a bitch. He didn’t let anybody speak, he rushed us in and out of the meeting. The meeting was bullshit He already had the suspension in his hand.”

Considering Burfict has a two-minute long highlight tape of dirty hits he’s lucky he’s not banned for life from the NFL.