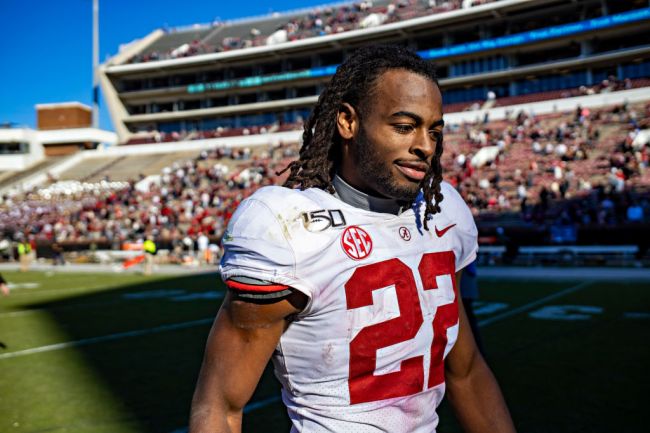 Najee Harris became the first running back selected in Thursday’s NFL Draft after the Steelers traded up in the first round to bring him to Pittsburgh. Not long before the evening began, the Alabama running back was throwing a preemptive party at the homeless shelter where he and his family once lived.

Hours prior to making millions of dollars, Harris brought food to the Greater Richmond Interfaith Program and insisted on picking up the tab. He stayed at GRIP in middle school before moving to Antioch, CA for high school and ultimately going on to be a tremendous talent in Tuscaloosa, Ala. It was a pretty special afternoon for him and those in the shelter. Harris is just such an awesome dude.

Whatever team drafts Alabama's Najee Harris is getting a special person. Today he threw a draft party for kids at the homeless shelter where he lived for several years growing up. He told me it was emotional the first time he went back to visit. @kron4news #NFLDraft #RollTide pic.twitter.com/JadBIFh4pd

After celebrating his journey and giving back to the place that was there for him a decade ago, Harris returned home and waited 24 picks to hear his name called. The Crimson Tide product will receive somewhere in the ballpark of a four-year contract worth somewhere between $10 and $13 million. He deserves it.

With the No. 24 pick, the @steelers select: Najee Harris, RB, Alabama@ohthatsNajee22 | @AlabamaFTBL

Harris was considered the No. 1 overall recruit in the 2017 class and chose to play for Nick Saban over offers from Michigan, Ohio State, USC and Notre Dame. He ran for more than 2,700 yards in both his junior and senior years of high school and broke the 2,000-yard mark in all three years he was a starter at Antioch.

With the consistent revolving door of talent that is in the backfield at Alabama, it took some time for Harris to get the lion’s share of carries with the Tide. He saw limited touches behind Damien Harris, Bo Scarbrough and Josh Jacobs as a freshman and sophomore before taking over the starting role in year three. No. 22 ran for 1,224 yards and 13 touchdowns as a junior and doubled his touchdown output this past fall. Harris capped his career with a national championship and has an incredible ability to hurdle defenders.

Steelers just got a guy in Najee Harris who likes to jump over human beings on the football field pic.twitter.com/v4q9DcVjde

It has been a long road for Najee Harris to get to where he is. Everybody he has encountered along the way has had nothing but good things to say about him and his background gives a good glimpse into his character. Returning to the homeless shelter where he spent a formative part of his life prior to perhaps the most formative part of his life was pretty special. We’re all Najee Harris fans now if we weren’t before.