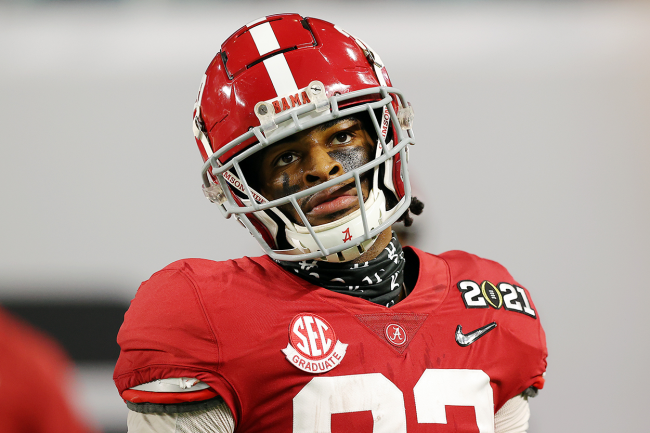 Najee Harris is one of the best running backs in Alabama football history and that says a lot considering their revolving door of talent at the position. However, it wasn’t all sunshine and rainbows for the former first round NFL Draft pick and his head coach.

In fact, Harris, who has been vocal about the difficult adjustment from California to Alabama in the past, says that he and Nick Saban did not always get along, especially at first. The former was not a big fan of how the latter treated his players during his time in Tuscaloosa.

During an appearance on The Pivot Podcast, Harris said that he and Saban often argued during practice.

“I’m not the type of dude to just sit back and let somebody talk to me in a way and then not expect me to say something,” Harris said. “I can take coaching, but it’s a certain type of line when you cross, it’s like, ‘All right, I’m a man, you ain’t gonna talk to me like that.'”

Harris revealed that he actually left the Alabama program for two weeks during his senior season, which also happened to be the COVID-shortened 2020 season. That was previously unknown to anyone outside of the program.

When Harris returned to campus, he and Saban had a one-on-one meeting in Saban’s office that involved the exchanging of words. It ultimately improved their relationship.

“He took his time out that day to really understand who I am,” Harris said. “And ever since that day, we was rock solid.”

If that wasn’t jarring news enough, Harris went on to compare Saban to his current head coach, Mike Tomlin. He said that the two have “zero” in common beyond their success and desire to win. Tomlin, Harris said, takes more time to get to know his players.