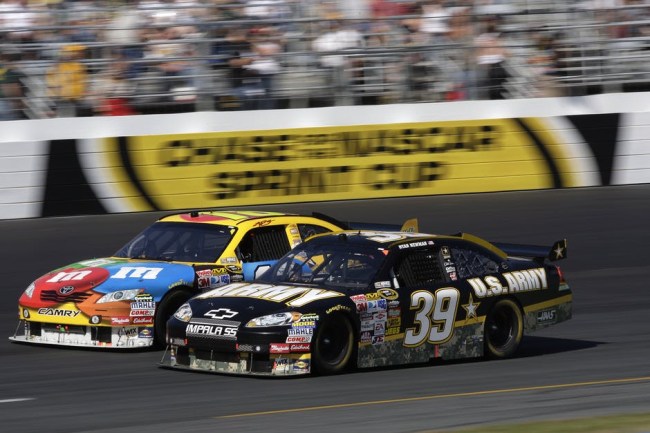 NASCAR driver Noah Gragson had one of the best, and then most embarrassing, nights he’s probably ever had as a pro driver the other day — and it was all caught on camera for our viewing pleasure. But, hey, he comes out with the last laugh, so he can’t be too bummed about that.

First, the best part. After winning the 51st Snowball Derby the other day, Noah Gragson, who’s still only 20 years old, was probably on cloud nine after earning another win on the NASCAR Camping World Truck Series. Coming behind in thrilling fashion, the young prodigy showed why he was voted by fans as the 2018 most popular driver on that circuit.

Now, the embarrassing part. While celebrating the Snowball Derby victory, Noah Gragson took his shot with a woman named Helena Ciappina, who earned this year’s 2018 Miss Snowball Derby, leaning in for a big ol’ kiss on the lips, even wrapping his arms lower waist to go in for it. Bold move, son. Problem was, Helena denied him hard AF right there on live TV. Take a look at the cringeworthy video, via Corey LaJoie’s Twitter account.

Ouch, that has to hurt.

Luckily, Noah Gragson didn’t stay defeated for too long, because, eventually that night, he got the kiss he was looking for from Helena Ciappina. Peep the video below, also from Corey LeJoie’s Twitter account.

Hey, not only did Noah get the kiss he so boldly went for, but Helena even gave the 20-year-old a shout-out on her Instagram by posting pics of them together with the trophy — which could have been worse, given the fact she could have playfully crapped on him about the airballed kiss attempt.

Maybe the best thing about this Noah Gragson kid, though? This wasn’t his first time looking for kisses, as, per NASCAR.com, the NASCAR driver pulled something similar in the summer of 2017 while receiving his high school diploma. After being handed the diploma, Gragson turned to two, very unsuspecting, Texas Motor Speedway women, planting a kiss on both of them, too. Man, this kid is reckless when he’s around pretty gals.

This wins best graduation ever. Thanks Texas Motor Speedway. pic.twitter.com/NWuQ5mZWtP

Hey, every dog’s gotta eat, and Noah Gragson is just trying to be one dirty dog, isn’t he? Major kudos to the kid, because this isn’t a bad M.O. to have.