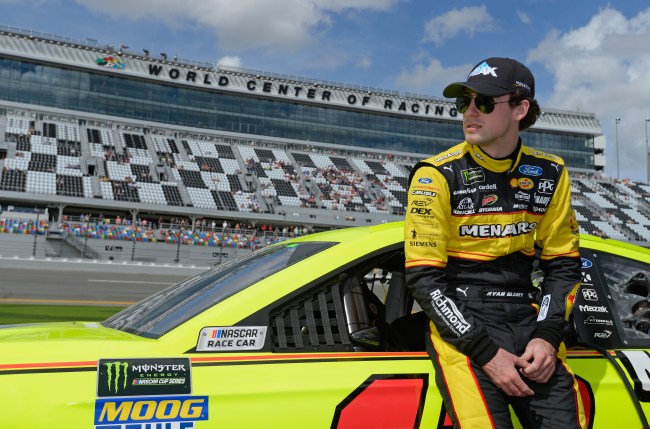 Sans driving complicated machines at 200mph, NASCAR drivers really are just like most of us. Hang around a NASCAR track long enough on a race weekend and you’ll learn that they like beer, cheeseburgers, FIFA video games, and Chris Stapleton just like the rest of us.

Ryan Blaney is about as every-day-Bro as it gets. A third-generation stock car driver from Ohio,  Blaney had a hell of a year in 2017: He got his first win at the June race at Pocono, ending 2017 in 9th place overall. This year Blaney will strap into the No. 12 Ford Fusion for Team Penske in the Monster Energy NASCAR Cup Series, marking a huge career step for the 24-year-old driver.

I jumped on the phone with Blaney during the Daytona 500 Media Day to just… talk. We chatted about Denny Hamlin’s basketball league (…which sounds intense) and how he spent his off-season traveling, from Ireland to Costa Rica. He’s also super stoked about MARVEL’s Black Panther hitting theaters this weekend, noting that he’s hitting the theater with a big crew on Friday night while down in Daytona.

“You’re a big comic book… nerd. Black Panther is coming out this weekend, are you going to see it? Are you stoked for it? Thoughts?”

“Yeah, man! It comes out on Friday. I’m going to see it on Friday night here, in Daytona. I’ve already got tickets. I can’t wait. The trailers look amazing. It’s going to have a cool different look in that world. I just think it’s going to be a badass lead up to The Avengers movie. I’m PUMPED for Infinity Wars.”

You get the gist. Ryan Blaney, a Bro just like the rest of us, getting hyped up like crazy for Black Panther before starting the season in the Daytona 500. What a dude.

Listen to our conversation below. And don’t forget to sign-up for BroBible’s NASCAR Fantasy League.