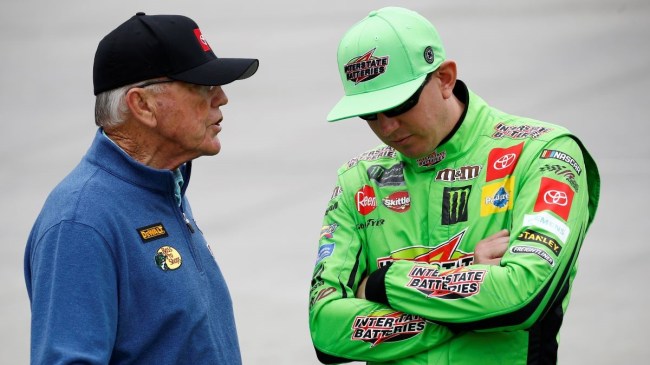 NASCAR superstar Kyle Busch is known for his sometimes bristly personality. But the 37-year-old from Las Vegas is also a prodigious talent. Busch is a two-time NASCAR Cup Series champion. His 60 career race wins rank him ninth all-time and first among active drivers and he’s only just hitting the presumed prime of his career.

So it came as a shock to the entire motorsports world when Busch announced he was leaving Joe Gibbs Racing after 15 seasons with the team. His departure and eventual signing with Richard Childress Racing set out a chain of events that shook the entire series. It even eventually worked its way all the way down to Michael Jordan’s 23XI race team.

But Busch didn’t want to leave and was seemingly forced out due to sponsorship troubles and the inability to come to an agreement on a new contract.

Busch seemed to put the breakup on Gibbs. The polarizing superstar recently opened up about how things went down and how it made him feel.

Busch spoke about the breakup in a recent episode of USA Network’s NASCAR documentary series, “Race for the Championship.”

“Something that is so disappointing to me, and so hurtful about this whole situation with JGR, is they were like family,” Busch said in the emotional Episode 8 interview. “For 15 years, Joe had my back in the stupidest of moments that Kyle Busch was. Like, he was there for me and it’s gone. It just flipped and gone and it’s like nothing I’ve ever been a part of.” – via Yahoo! Sports

Candy giant Mars has sponsored Busch for a significant portion of his time at Joe Gibbs Racing. But the company announced earlier this year that it would not continue the partnership following the season. That left Busch, and Gibbs, searching for sponsorship.

Things became even more contentious with the success of Joe Gibbs’ grandson, Ty Gibbs, in the NASCAR Xfinity Series. The younger Gibbs has won five races this season and is currently in the semifinals of the Xfinity Series playoffs. The 20-year-old has also made 12 Cup Series stars this year for Michael Jordan and Denny Hamlin’s 23XI team, replacing the injured Kurt Busch, Kyle’s older brother.

The elder Busch brother recently announced his retirement due to ongoing post-concussion symptoms.

Hamlin is currently a teammate of Kyle Busch with Joe Gibbs Racing and his 23XI team works in conjunction with JGR. Ty Gibbs hasn’t yet been named as Kyle’s replacement in 2023. But it’s seen among the NASCAR world as a foregone conclusion.