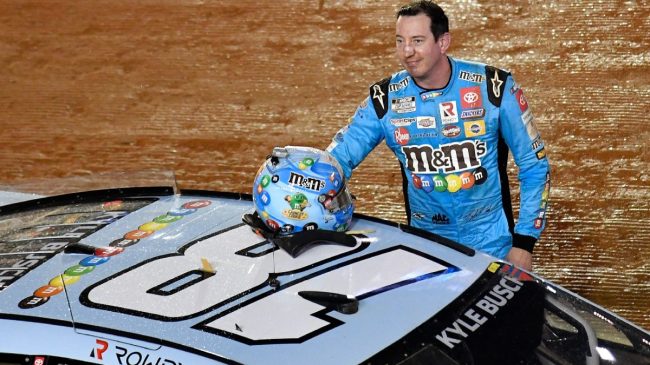 The Bristol Motor Speedway looked a little bit different over the weekend.

NASCAR opted to have a dirt track race at the legendary racetrack, which produced a ton of problems for drivers in the rainy conditions. It also made for some fantastic television.

There were spin outs, fender benders, stall outs, and more, all culminating with a photo finish on the final lap. Just check out some of the action below.

A tough break for multiple drivers coming off of the corner at @BMSupdates. pic.twitter.com/svfrtiAiyv

A traffic jam in the corner! ⚠️ pic.twitter.com/h2ECdTfanw

Drivers were even struggling just to keep their cars on the track in caution laps. Watch Christopher Bell spin out in his No. 20 car before the action even gets going.

After a number of delays and weather stoppages, racers geared up for the final run. That’s where things got even more interesting.

On the final turn of the race, leaders Tyler Reddick and Chase Briscoe both spun out, leaving third place Kyle Busch to sneak in and land a come-from-behind victory.

Busch won by the slimmest of margins, just nosing out Reddick by .33 seconds. It was the only lap he led the entire race.

Still thinking about this finish. pic.twitter.com/xCI4dL5LyS

The exciting finish kept viewers entertained, but that doesn’t necessarily mean they liked the final result.

After earning the win in dramatic fashion, Busch was quickly interviewed by Fox reporter Jamie Little. The crowd reaction wasn’t exactly what the winning driver expected.

"I feel like Dale Earnhardt Sr. right now … I didn't even do anything." Kyle Busch reacts to the boos at Bristol. pic.twitter.com/uDfJ7nCOix

Busch is met with a chorus of boos from the NASCAR fans, though he was able to shrug it off with a laugh.

“I feel like Dale Earnhardt Sr. right now, this is awesome. I didn’t even do anything.”

Busch will gladly listen to the boos if it means landing more wins. This was his first of the year, and while he didn’t win over any supporters with the victory, he’ll certainly take it as he creeps up the NASCAR standings.