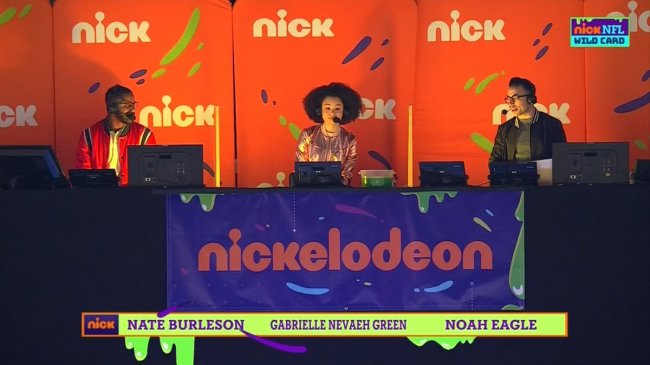 In addition to Sunday’s Wild Card game between the Saints and the Bears airing on CBS and Amazon Prime Video, the NFL gave its rights to Nickelodeon for a unique kid-focused broadcast. Former Detroit Lions wide receiver and CBS analyst Nate Burleson joined Ian Eagle and Gabby Nevaeh Green in the three-man booth and quickly became a fan favorite with his incredible analogies and hilarious analysis that was suitable for younger ears.

The funniest moment of the first half came when Green asked Burleson how NFL players go to the bathroom during the game. Fortunately, he did not go into extreme detail or bring up the (fairly common) practice of simply urinating in uniform on the field.

Other analogies included how the game relates to putting in the work to prepare for a test, explaining Taysom Hill’s role with the Saints and being grounded. They were all great.

Nate Burleson saying moving down the field is like homework and the red zone is the test is honestly the best football explanation I've ever heard.

Watching @nateburleson give us “Sweet Victory” after the Titans just lost was something I didn’t know I needed.

Nate Burleson on Nickelodeon explaining who Taysom Hill is: "Alright children. He's the kid at recess who can do everything."

This is great so far. If you’ve got little kids, fun way to watch the broadcast…

“Standing in the pocket that long is almost as scary as watching ‘Are You Afraid Of The Dark’ with the lights off”.

Comparing third down to a Double Dare physical challenge is just genius work by @nateburleson. #NFLonNick

“Being benched in the NFL is kind of like getting grounded.” – @nateburleson

Burleson’s most impressive work came when Bears wide receiver Anthony Miller was ejected from the game. He described the importance of avoiding conflict for all of the children tuning in. It was simple and relevant without talking down to those watching.

The way they explained the Anthony Miller ejection for kids to understand on the Nickelodeon broadcast of Saints-Bears is really cool and a perfect example of the value it has. pic.twitter.com/38evabMNs4

It has yet to be seen whether this will be a one-time broadcast, but it was such a hit that Nickelodeon and the NFL alike would be silly not to a run it back.