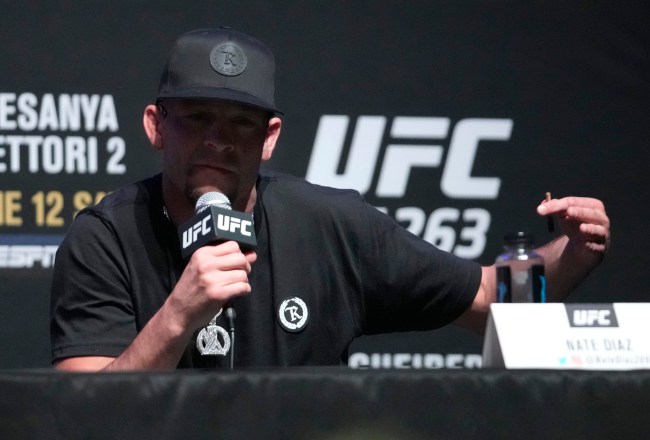 Nate Diaz is officially back.

This weekend, Diaz makes his long-awaited return to the Octagon against veteran fighter Leon Edwards.

Ahead of the fight, the two fighters met at the UFC 263 press conference on Thursday afternoon.

During the presser, Diaz could be seen taking a puff ofF a joint and asking fellow UFC fighter Brandon Moreno if he wanted to take a hit.

Nate Diaz sparking up a joint during the UFC 263 press conference. Legend (via @_EmmanuelMorgan) pic.twitter.com/UWOwiWx2cN

I believe Nate Diaz just offered Brandon Moreno some of what he is smoking. #UFC263

Diaz would later confirm he was smoking his own brand of weed, Kill_4209.

Nate Diaz (@NateDiaz209) was smoking marijuana on stage not CBD, his team tells me. Its his own brand, Kill_4209. Rules in Arizona allow him to smoke closer up to the fight than other states.

UFC Senior VP of Athlete Health and Performance Jeff Novitzky explained that Diaz was allowed to smoke weed days before the fight as long as he doesn’t show up high on Saturday night.

Great working with AZ Commission, who are adopting our testing program/rules for this weekend. Only issue with marijuana (THC) for Saturday’s fights is don’t show up impaired or under the influence. How it should be!