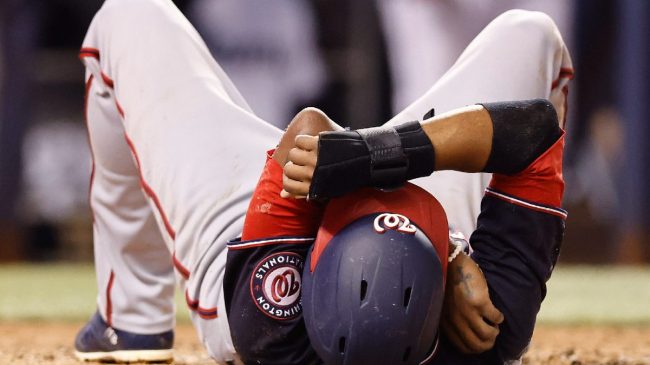 The Washington Nationals shortstop was hit in the family jewels by an errant pickoff attempt from a Pittsburgh Pirates pitcher. Escobar immediately collapsed to the ground, wincing for a brief moment in pain.

Every guy has been drilled in the groin by something, whether that be a hand, a foot, a knee, or some other force producing extremity. But a baseball? That’s a pain that one only knows from experience.

Check out the unfortunate turn of events below.

Alcides Escobar is a true warrior for being able to laugh this off pic.twitter.com/B52gzusS95

Fortunately, Escobar was able to quickly get back to his feet, laughing off the incident with first baseman Yoshi Tsutsugo.

The social media reaction took off following the errant throw to the midsection. The Twitter response was hysterical, with the moment becoming an instant GIF.

Alcides Escobar gets hit in the plums. pic.twitter.com/GhXwVjTtXc

My name is Alcides Escobar and this is the Cup Test https://t.co/11wlecgSRF

Alcides Escobar singled and then was hit square in the … on a pickoff throw from JT Brubaker. Called time as he was falling over but wound up laughing as Dave Martinez and Paul Lessard checked him out.

Somehow, Escobar was able to stay in and finish out the game. He closed out the game with one hit over his four plate appearances, but unfortunately, it wasn’t enough to lead the Nationals to a win over the Pirates.

Pittsburgh took the game by a score of 9-4 over Washington. The Nats shortstop will hope to avoid any painful incidents like this in game two of the series.