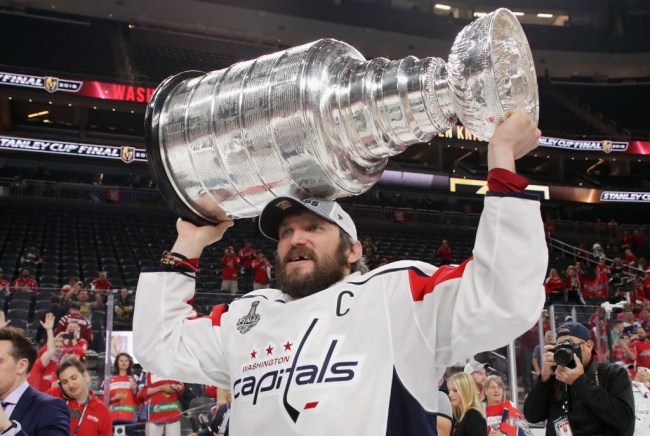 After suffering defeat after defeat at the hands of Sidney Crosby, Alexander Ovechkin finally managed to lead the Washington Capitals to the Stanley Cup Finals this season and did Las Vegas sportsbooks a solid by dispatching the Golden Knights in five games and earning the right to touch the trophy for the first time. After hoisting the cup, Ovechkin did what anyone who’s waited their entire career to win a championship has earned the right to do: go on an absolute bender.

After making an appearance at a Nationals game, Ovechkin proceeded to do a keg stand (or, more accurately, a Cup stand) before ripping off his shirt and jumping into a fountain in Georgetown. He also downed some drinks with Jimmy Fallon last night, because he’s probably reached a point where he could actually die if he suddenly stopped consuming alcohol.

Ovechkin is far from the only person to celebrate the Cap’s win with copious amounts of booze. However, I’m not sure if anyone can top the group of bros who dedicated their Monday night to crushing at least a couple of cases of Natty Light in order to make their own version of the Stanley Cup made out of beer cans and topped with a colander. It’s kind of like a wizard’s staff only infinitely cooler.

They proudly showed off their accomplishment to reporters while waiting for today’s victory parade to kick off in D.C.

A #stanleycup FOR THE PEOPLE!!! A trophy that brings friends together… 😂🍺 #ALLCAPS #FOX5CAPS pic.twitter.com/opoHGJfH1A

When you consider how early they must have gotten up to get a prime spot along the parade route, I hope they had a few extra cans to help combat the hangovers they must have woken up with this morning.