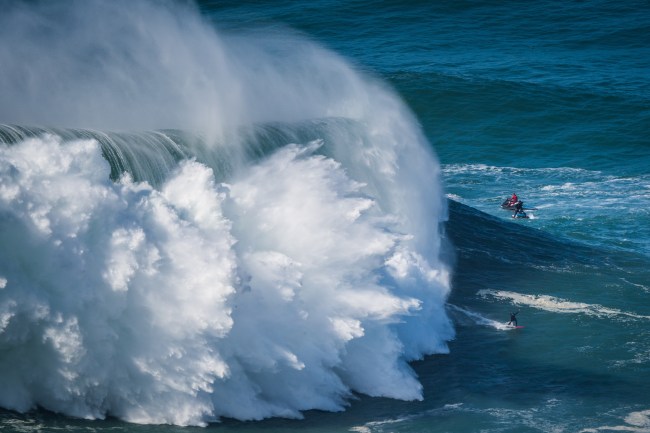 Last week I brought you gentlemen some Big Wave Surfing footage from Nazare, Portugal as it got pounded with some of the largest waves ever surfed in history as Hurricane Epsilon made its way across the Atlantic Ocean to Europe. If you missed any of those potentially once-in-a-lifetime waves I’ve included some more footage below but what we’ve got here are the gnarliest wipeouts.

Nazaré is a small fishing village in Portugal that’s located about halfway between Lisbon and Porto and because of the unique underwater canyon right off the beach it produces the largest surfable waves on the planet when the conditions are right. It’s home to an annual Big Wave Surfing competition when the weather is right and the waves are firing and Nazaré has produced multiple world record waves for the ‘largest wave ever surfed.’

One cool aspect of the break at Nazaré is how the canyon is incredibly deep but narrow so it corrals these massive waves right at a spot on the beach where spectators can sit on the hillside and watch as surfers charge the largest waves imaginable.

The World Surf League released this short compilation of the most brutal wipeouts from the Hurricane Epsilon swell. Soak it in as some of the craziest extreme sport athletes on the planet throw caution to the wind and ride skyscraper-sized waves:

Now that you’ve seen the most brutal wipeouts from the Nazaré Hurricane Epsilon swell you owe it to yourself to hang around and see the best rides. WSL also released a several minute compilation of the best waves surfed and I’ve got this clip here from Nic Von Rupp which does a really good job at showing just how massive these waves were.

These big wave surfers are complete animals. Each way requires them to throw caution to the wind, commit to their training, and trust that the rescue squad is there to save their lives in case anything goes wrong which happens more often than you’d imagine.