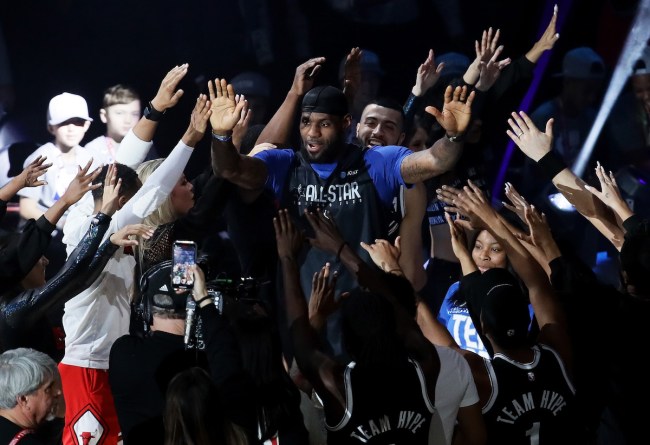 In a normal year, the NBA All-Star Weekend would’ve just occurred, bringing one of the most entertaining sports weekends to fans and players of the league. Of course, due to the ongoing pandemic, things are paused on that front, with the NBA trying to figure out how to maneuver the event in Atlanta that’s scheduled for March 7.

While players such as LeBron James and others have slammed the decision for the league to have an All-Star Game — candidly calling it nothing more than a money-making event — they’re not the only ones expressing concerns. In fact, the Mayor of Atlanta, Keisha Lance Bottoms, echoes those sentiments, and delivered a harsh warning for fans and business in her city to avoid traveling and/or putting on events related to the weekend.

Calling it a "made-for-TV event only" and urging fans not to travel to the city, Atlanta Mayor Keisha Lance Bottoms has today issued a statement raising concerns about the looming NBA All-Star Game in Atlanta expected to take place March 7. Via @ChenueHer: pic.twitter.com/J9r7bnWfZX

The fact that Keisha Lance Bottoms doesn’t mince words when describing the NBA All-Star Weekend as a “made-for-TV event” goes to show you everything you need to know about her feelings. Atlanta only got the game after plans to play it in Indianapolis folded due to the pandemic and scheduling conflicts with the NCAA Tournament being played in and around that city.

Even with the NBA All-Star Weekend expected to be played in Atlanta, the entire event will look a little bit different than normal. Instead of a dedicated night to events like the three-point contest and the skills challenge, those will be done during the pregame session of the actual All-Star Game.

As for attendance, the Atlanta Journal-Constitution‘s Sarah K. Spencer noted that tickets are unavailable for the game, however about 1,200–1,500 people will be in the arena, with those mostly consisting of local healthcare workers and students/staff from local HBCUs. Family members of the players may also be present.

Additionally, a league memo, obtained by ESPN, describes the lengths that the league will go for players traveling to the NBA All-Star Weekend. Take a look below at some of the protocols.

The memo, which was obtained by ESPN, states that players participating in All-Star Weekend are allowed to travel only to their out-of-market home before going to Atlanta. In addition, everyone traveling to and from Atlanta will do so by private transportation that will be provided by the NBA. Each player will have to have a negative PCR test on March 6 and 7 before participating in any of the All-Star festivities, and all will be allowed to bring a “limited” amount of family or close friends with them, though all will have to follow the same testing and travel protocols that the players will.

During their time in Atlanta, players and any guests they bring with them will only be allowed to be at the hotel or the arena.

With all the security measures and dedicated emphasis to keep players safe, it begs the question: Why would the league even want to play the NBA All-Star Game this year? Obviously, it’s because of money, which both James and Keisha Lance Bottoms deliberately call the league out for.

Instead of putting on the potential risky event, the league should consider doing something like the NFL did for this year’s Pro Bowl, and give guys a few days off, while encouraging interested players to play a virtual version of the event. It’s probably too late for that, so it’ll be interesting to see how all of this unfolds.