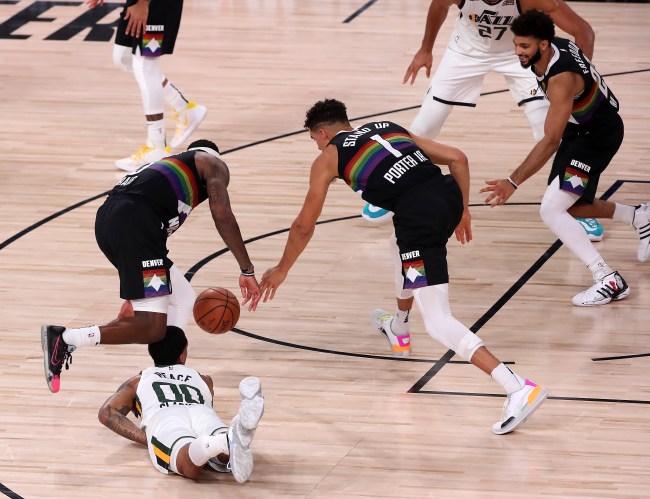 The most overused joke on Twitter Tuesday night was ‘this Game 7 is a Big Ten game’. A lot of fans expected an offensive explosion from the Utah Jazz and Denver Nuggets in Game 7 of their Western Conference 1st Round matchup but what they got was a 78-80 final score with the Nuggets moving onto the next round.

Despite 95% of the game being a veritable letdown, the finish was electric. Some were calling it the best finish to an NBA game they’d seen this season. The back and forth, steals, and misses had fans on the edge of their seats. Amongst those fans sweating out the ending was one bettor who bet $550K to win $500K and cashed for over a million.

First, watch the last seconds of that game if you haven’t already because it was electric.

Now for the bet…

Patrick Everson reported before the game that William Hill had taken a $550,000 wager on the Denver Nuggets moneyline (-110). The bet was placed at William Hill’s Las Vegas location and the gambler had to sweat it out until the last second of the game before knowing they’d locked it up, nearly losing their wager on a buzzer 3-pointer that just missed. They won $500,000 and recouped their $550,000, cashing for a total of $1,050,000 after the last second chaos.

That was nuts. And a helluva sweat for this @WilliamHillUS bettor, who pockets a $500K win on Nuggets moneyline. @Covers https://t.co/w1PQbR6zFb

This was the icing on the cake:

BTW, the @WilliamHillUS bettor who had the $550K play tonight also had $300K Nuggets moneyline +130 in Game 6 Sunday night. So bettor collects $890K over last 48 hours or so. @Covers https://t.co/TnGPTJxIBW

Tonight’s matchups include the Miami Heat vs Milwaukee Bucks at 6:30 pm (Game 2) and Oklahoma City Thunder vs Houston Rockets at 9 pm (Game 7). Check back later today on our Sports tab for our expert’s picks on tonight’s games.