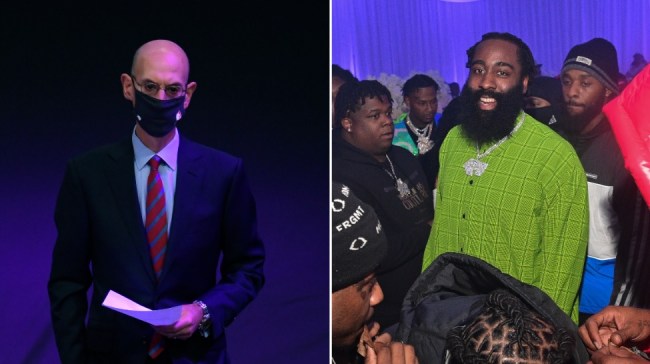 The NBA decided to fine James Harden $50k and not suspend him after he was seen violating the league’s Covid-19 protocols by going out to a club without wearing a mask days before the team’s opening game.

Rockets guard James Harden will be required to isolate until Friday and continue to test negative for the coronavirus before being cleared to return to play, sources tell ESPN. He should be available to play Saturday vs Blazers.

On Thursday, NBA commissioner Adam Silver appeared on ESPN’s The Jump and was asked why he didn’t suspend Harden for violating Covid-19 protocols. According to Silver, he decided against a suspension because “it’s Christmas, and it was a first offense” of the league’s newly installed protocols.

Adam Silver, appearing on ESPN, said James Harden was not suspended because "The precedent is that discipline gets ratcheted up. It’s Christmas. It was a first offense."

Silver said "in a way he got lucky." If the game had been played, Harden would have been docked 1 game's pay.

Adam Silver on why he didn't suspend James Harden for violating Covid-19 protocols "It’s Christmas. It was a first offense." pic.twitter.com/b5BI02egfX

silver will say what he has to say … but this comes off like he went soft on Harden because he's a star https://t.co/MT1Jjc6deL

Well done, Commish. You’re really going to show that guy flying around the country and partying while training camp is going that you mean business with this approach. https://t.co/sE4d7tSHIB

The precedent is actually now: All 450 NBA players get one free pass to break COVID protocols. What an awful process. And this is day three of the season. https://t.co/WuA7aERKFe

they count Harden’s offenses like the refs count his steps https://t.co/EMk1Z7YTbp

The only precedent is that your first violation doesn’t result in real consequences https://t.co/sJMOtM93b5

“It’s the first offense” in a pandemic. This is why NBA players do whatever tf they want cause they don’t respect this loser https://t.co/SUOapv2Uu3