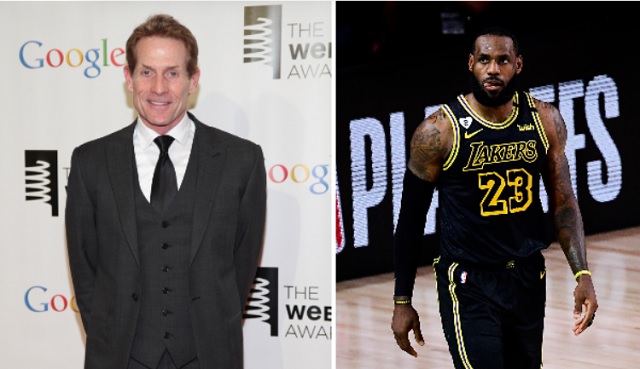 LeBron James is on his way to his 10th NBA finals appearance but Skip Bayless was somehow still able to hate on him after the Lakers eliminated the Denver Nuggets.

During the Lakers game 5 win on Saturday, LeBron went off in the fourth quarter and dropped 16 points including this dagger 3-pointer that basically ended the game.

Despite LeBron’s impressive performance, Bayless went on a tirade on how the Lakers were lucky the Clippers were eliminated early because he felt the Clippers would have easily beaten the Lakers.

This is LeBron's easiest path to a ring: KD/Kyrie decided not to play. So LBJ got to beat a 35-39 Portland (and Dame got hurt), then the Rockets after Danuel House broke house rules, then the Nuggets instead of Kawhi's Clippers, and now maybe the overachieving Heat. Meant to be.

Biggest shot of the 4th quarter was not by LeBron. It was Danny Green's three after the Nuggets cut it to 4 points with 4:20 left. That broke it open.

I guess LeBron was trying to get even with Mike Malone, who coached him in Cleveland, for saying during "The Last Dance" that LeBron doesn't have the killer mentality that Jordan did. Malone didn't lie.

Of course, Skip was mocked over his hot take on LeBron and the Lakers.

“cLippErs wOuld hAvE BeAt tHe LAkErs” clippers couldn’t make it past the 2nd round and blew a 3-1 lead, this man is the biggest hater ever https://t.co/hlIptDFAhH pic.twitter.com/4gxMIJ5179

Clippers lose to the Nuggets 3 straight games to blow a 3-1 lead.

Lakers beat the Nuggets in 5 games.

Just let the tears flow skip we know you're hurting like your guy front runner Leonard who had a 3-1 lead but you're here being very delusional. While giving him a pass. If lebron did that he would have to retire. You're such a hypocrite. pic.twitter.com/SlQDjXIJzE

Skip is this the best you got? 💜💛 #Lakers 🤣 https://t.co/iVobAECVBM pic.twitter.com/DxuSqfRuEW

I kind of appreciate how consistent you’ve been at dismissing the greatness of this man.

I respect that you’re willing to die on that hill despite being wrong. https://t.co/gqnl9kui4N

ThE ClIPpErs WoUlDve BeatEN…shut yo ass up! Lmao. They couldn’t even beat the team we just beat lmao pic.twitter.com/IImuTSIOsJ