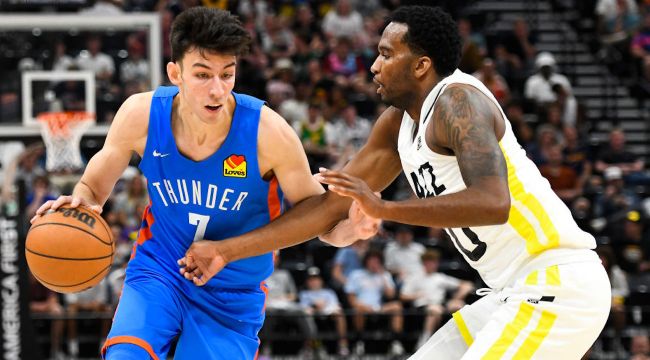 Here’s what I don’t like about Chet Holmgren (no offense to him, of course): he makes me feel incredibly old as he appears to be one of the first TikTok teens to make it into the NBA, following the likes of Tyler Herro before him. Other than the fact that my existential battle with almost turning 30 is manifesting itself in a faux dislike for a 7’1″ 20-year-old, though, I wish him nothing but the best!

And the best, apparently, is what some people think Holmgren might turn out to be after seeing him play in just ONE Summer League game, as the 2nd overall pick in the 2022 NBA Draft posted 23 points, 7 rebounds, and 6 blocks during his first taste of professional basketball.

Given Holmgren’s unique slender stature, the former Gonzaga star has become something of a meme already, as the duo of he and Aleksej Pokusevski has already been dubbed the “Thin Towers”.

That extremely high meme-ability translated into Twitter somewhat predictably overreacting to Holmgren’s first Summer League game, with some jokingly wondering if the 20-year-old center is the GOAT-in-the-making.

.@ChetHolmgren tweeted this out after going OFF in his Summer League debut 👀 pic.twitter.com/2eSbBkNqR6

Chet looked more like the HS version of himself with the freedom to create so much off the dribble. Just better. pic.twitter.com/g2ivpAxvhi

Chet Holmgren is hitting pull up threes, one legged fadeaways… 6-for-7 shooting, and 3 blocks… all in the first half.

This kid is ridiculous.

Everyone before this game: Don't overreact to the Summer League

Me after watching Chet Holmgren and Josh Giddey for 6 minutes: RIP OKC Rebuild 2020-2022

After missing the postseason last season as the 14 seed in the Western Conference, the Thunder and their fans will be hoping that adding Holmgren to their promising young core — that includes the likes of Pokusevski, Shai Gilgeous-Alexander, Lu Dort, and Josh Giddey — will propel them back into playoff contention this year.

RELATED: Ja Morant Gives $500 Tip To Waitress Who Loses It After Realizing Who He Is (Video)