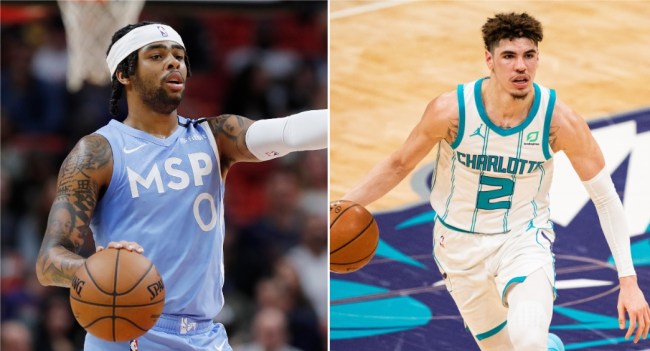 Timberwolves guard D’Angelo Russell chose the wrong time to advocate for his teammate Anthony Edwards to win the rookie of the year award.

On Sunday night, rookie of the year frontrunner Lamelo Ball injured his wrist and is reportedly out for the season.

Here is the play where LaMelo Ball fractured his right wrist ⤵️ pic.twitter.com/MO1NdpAIUu

Charlotte guard LaMelo Ball — rookie of the year frontrunner — is expected to miss the rest of the season with a fracture to his right wrist, source tells ESPN. He's seeking a second opinion to confirm the diagnosis.

Immediately after Russell’s injury was reported by the media, Russell declared Edwards the rookie of the year.

People were pissed at Russell’s timing and blasted for it.

Couldn't even give it 30 minutes, huh? https://t.co/BZQyIRhnmU

The funny thing is that the Timberwolves should've picked LaMelo and traded you. Kinda like how the Lakers did with you and Lonzo. 🤡 https://t.co/RyiYqMGZKl

You're a snitch and a cornball👍🏾 https://t.co/DACCbVYpbA

You really tweeted this moments after @wojespn announced that LaMelo Ball will most likely be out with a fractured wrist?