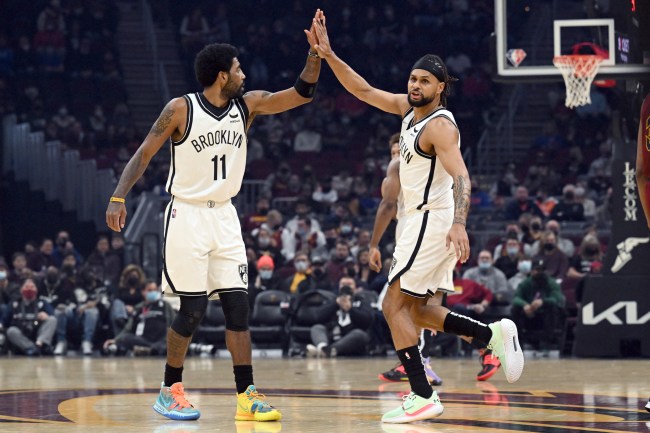 Kyrie Irving made headlines when he correctly clapped back at one fan while the Brooklyn Nets were taking on the Cleveland Cavaliers. Unfortunately, it would appear that being right doesn’t impact the NBA’s decisions when it comes to fines.

It was announced today that the NBA would be fining Kyrie $25,000 for the incident.

The interaction began with a Cavs fan shouting “Kyrie, you need LeBron?” Kryie responded with some profanity and called the fan “ungrateful” for the title he won the team.

Kyrie chirped back at this Cavs fan heckling him. 🍿👀

The incident occurred during a 114-107 win by the Cleveland Cavaliers. Kyrie led the Brooklyn Nets with 27 points, 9 assists, and 7 rebounds in the loss.
The fine was given because Kyrie “directed obscene language at a fan” and I believe that is a mistake. There should be some kind of clause that says you can swear at a fan if they deserve it.

Kyrie was absolutely right on this one. He was a key component in Cleveland getting to celebrate its first title in 52 years. With the team’s back against the wall, Kyrie Irving dropped 41 points in a Game 5 that turned the series around. Then he proceeded to knock down the go-ahead 3 in game 7.

Cavs fans should worship the ground Kyrie walks on after he helped end the misery that comes with being a fan of any team in Cleveland.

Let this be a warning to the rest of the league’s stars. Being right is apparently not enough to save you from a fine in the NBA.