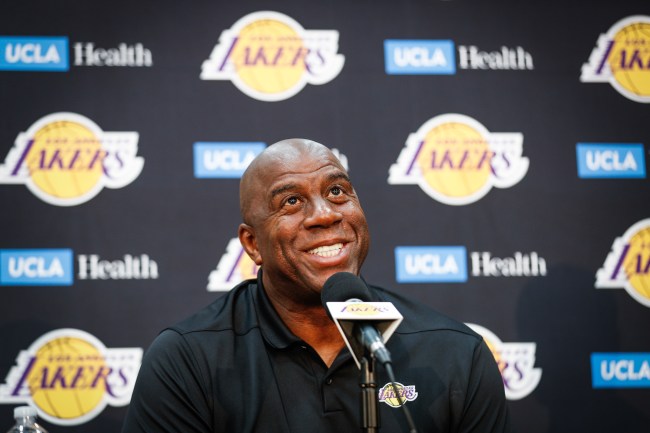 Magic Johnson is on the brink of another tampering charge after floating the idea of working out with Sixers guard Ben Simmons.

While speaking with the media Johnson revealed that Simmons had reached out to him about working out together in the offseason.

Magic Johnson, who just spoke to the media here in Philadelphia, said Ben Simmons has reached out to ask if the pair can work out together during the off-season. Magic said that (pending the NBA’s approval) he is willing to help out.

Here are Magic Jonshon’s full comments on potentially working out with Ben Simmons this off-season. He reinforces that approval from all three parties (Lakers, 76ers and the NBA) is first required. pic.twitter.com/l26Zh4e5JW

Sixers GM Elton Brand said that he shut down a meeting between Magic and Ben Simmons over a month ago which raised questions whether Johnson was tampering by bringing it up again.

"Rob Pelinka called me and said that Ben (Simmons) wanted to talk to Hall of Famers after the season, Magic was on the list. He asked for authorization… I said no. This was over a month ago." – Elton Brand shooting down the Ben/Magic meeting 🔥🔥🔥🔥🔥

So just to throw this out there.

and Magic brought it up again

The NBA is now stepping in and is investigation whether Johnson violated the league’s tampering rules which occurs when a team or its representative attempts to persuade a player, coach, trainer, general manager or any other person who is under contract with another team to join the tampering team according to NBA bylaws.

NBA spokesman Mike Bass tells ESPN: “The league office is looking into whether any contact took place between Ben Simmons and the Los Angeles Lakers that violated NBA rules.”

Johnson has been fined $500,000 for having impermissible contact with Paul George’s agent and $50,000 for complimenting Giannis Antetokounmpo in the past which means there’s a good chance he catches another fine from the league.