NBA Superstars Read Ruthless ‘Mean Tweets’ And I’m Not Sure Who Got Roasted Harder, Kevin Durant Or Chris Bosh 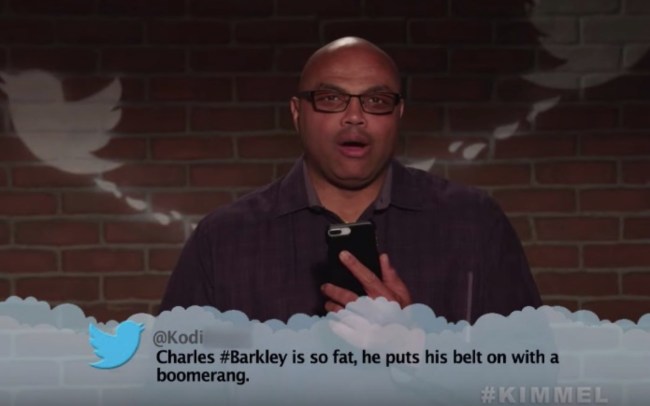 The 2019 NBA Finals kicked off last night with the Toronto Raptors winning Game 1 at home against the Golden State Warriors, a team that many basketball fans think could be the greatest dynasty team in NBA history.

One of the biggest storylines of the night was Drake sitting courtside wearing the throwback Raptors jersey of Steph Curry’s dad while also wearing an armband to cover up his Warriors tattoos. Yes, Drake has Warriors tattoos even though he’s allegedly a diehard Raptors fan. Drake also trolled the shit out of Draymond Green after the game and went viral for that.

As is a tradition on the ABC Network, Jimmy Kimmel Live aired a special pre-NBA Finals episode of the show. Last night’s guests were Adam Sandler and Jennifer Aniston who actually told a pretty crazy ass story about Jen having to make an emergency landing on a plane with Adam and Jimmy’s wives after the landing gear broke on takeoff. After that, they aired the newest edition of NBA Mean Tweets.

I’m not sure who gets roasted the hardest here because some of them get absolutely demolished but I feel like Kevin Durant might take the cake. He’s the first one to read ‘Mean Tweets‘ and holy shit is the person who sent him that tweet one of the angriest people on Twitter. Also, you can always find me on Twitter at @casspa.

Like I said before, you can always find me on Twitter at @casspa. If you checked my Twitter last night you would’ve found me live tweeting the 2019 Scripps National Spelling Bee instead of the NBA Finals.

If you do smash that ‘follow’ button be forewarned that I’m a diehard Tottenham Hotspur fan and we’re in the Champions League Finals this weekend in Madrid for the first time in the team’s history so Saturday will be a stream of nonstop soccer tweets.