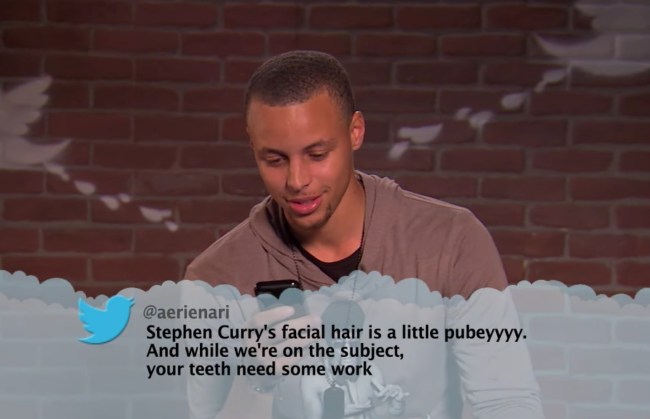 The NBA Finals started last night with the Los Angeles Lakers dominating the Miami Heat in Game 1. Anthony Davis went off for 34 points in 38 minutes. LeBron James fell one assist short of a triple-double with 25-13-9 (1 steal) in 36 minutes.

As he does every year, Jimmy Kimmel put on a 30-minute show before the NBA Finals on ABC in addition to his normal late-night show. His guest was Adam Sandler who was coincidentally sitting in front of a pair of autographed LeBron shoes.

The two discussed the weirdest thing they’ve ever autographed and Adam Sandler talked about how some guy once collected his hair after a haircut and put it in a Ziploc bag and asked Adam so sign the bag. He did and then he saw the hair listed as ‘Adam Sandler’s pubes’ for sale on eBay the next day, at least that’s the way he tells it.

Jimmy then ran the latest edition of ‘Mean Tweets‘ but this was a different year so instead of rolling out entirely new footage they hit the archives and spliced together the meanest, harshest, and most savage insults that have ever been seen in ‘Mean Tweets’. The result was this year’s ‘Mean Tweets – NBA All-Star Edition’ and it’s possibly the best yet.

Game 2 of the NBA Finals are on Friday night at 9pm. The Los Angeles Lakers are heavy favorites already with any books listing them at 7.5-point favorites.

This is the first time LeBron’s entered the NBA Finals with a teammate outscoring him in the NBA Playoffs but Anthony Davis has been an absolute monster so far and it’ll legitimately shock the sports world if the Miami Heat somehow find a way to make this a competitive series the way the Lakeshow is playing right now.

As for the ‘Mean Tweets’, it has me wondering if any NBA players aside from Kevin Durant actually read the comments on Instagram and responses to their tweets because people are throwing savage insults their way all day every day.

Here’s that interview with Adam Sandler if you’re interested in catching that as well:

Sandler says he’s in Philly shooting a movie. I’d love to see what the protocols are like on set right now and hear about the challenges in filming right now compared to a year ago. It has to be a night and day comparison.