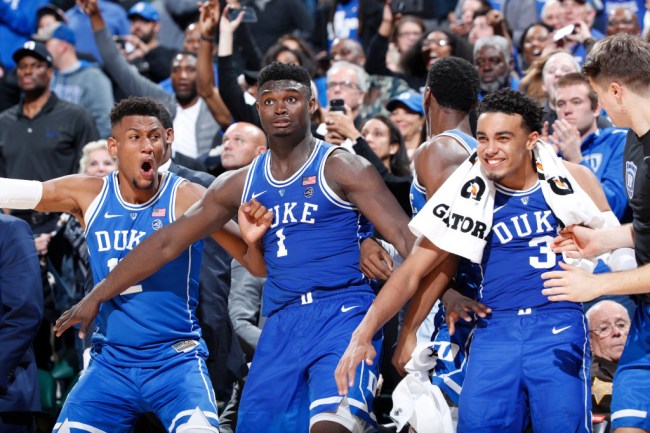 Fill out your brackets now and write Duke on that very last line because if last night’s 118-84 win over No. 2 Kentucky was any indication, the Blue Devils are going to run through the month of March like warm butter. Don’t give me this ‘it’s just one game!’ rubbish. What we saw last night was one of the most convincing college basketball performances of all-time, especially considering it came against Calipari’s one-and-done Kentucky team.

Duke’s three star freshmen Zion Williamson, R.J. Barrett and Cam Reddish all looked like they could star on the current day Cleveland Cavaliers.

Duke vs. Kentucky summed up in one play 😮

If you missed the game last night, here are 5 wild takeaways.

NBA players who tuned into watch the spanking expressed their awe with Duke’s basketball squad.

this Duke team is something else

Kentucky may get beat by 50

Rj Barrett is a dog 🐕. Definitely, my type of player
#collegehoops#duke#ballislife#ucantcheckme https://t.co/igkh89GbAR

Does Duke run the table and become the first team to go undefeated since Indiana did it in 1975-76 for Bob Knight’s first title? Too soon to tell? Maybe you’re right.