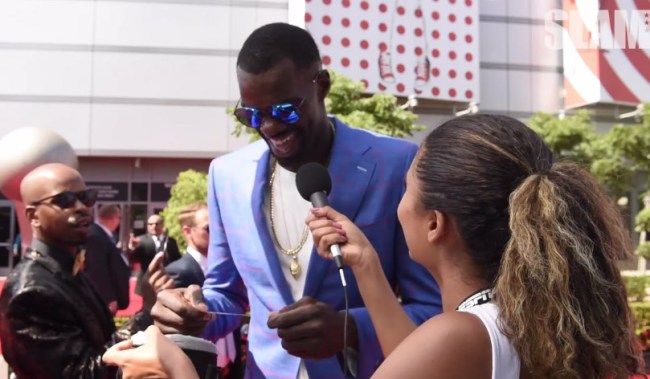 Remember way back in the early 2010s when Kevin Durant’s Twitter feed was a cornucopia of weird, slightly (and not so slightly) creepy tweets? Sure you do, we even took a fond (?) look back at some of them during the NBA Finals when he was getting into it with Rihanna.

Somebody get @Rihanna to wish me a happy birthday and I'll be good..ya understand

SLAM magazine remembers these tweets very well so while interviewing various NBA players on the red carpet at the ESPYS Alexis Morgan had them read a selection of KD’s strangest old tweets. Even Kevin Durant’s mom got in on it at the 2:10 mark of the video.

Here’s a little sampling of some of the choice Durant tweets they had the NBA stars read. Imagine them trying to do it with a straight face, because none of them could, for obvious reasons.

Scarlett johanneson I will drink ur bath water…#random

@DaRealAmberRose I kno this is random but I seen u in LA and u got the meanest bald head ever!!! Better than mj, Charles Barkley n all dem!!

Detroit Pistons forward Andre Drummond reading the Amber Rose tweet might be my favorite. Check out the rest of the hilarity below…

Between that video and Peyton Manning’s joke about him Kevin Durant had himself a bit of a rough night at the ESPYs. Thankfully for him, he has gobs of money and a fresh new NBA Championship to make him feel better.