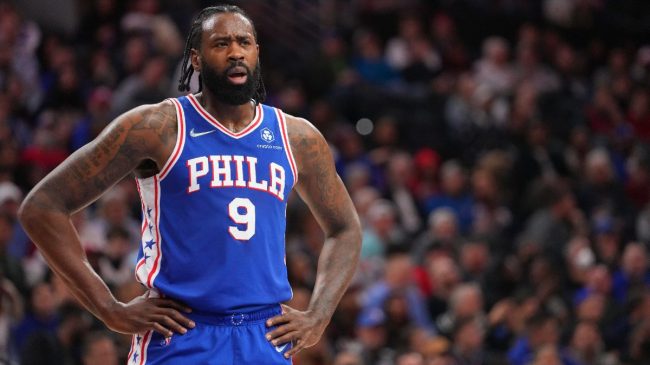 The Philadelphia 76ers’ championship hopes took a hit with the news that Joel Embiid would miss multiple games in their second round series versus Miami.

Philly’s best player, Embiid will be out for at least Games 1 and 2 after suffering a facial injury and concussion. With their leading scorer out, it was up to head coach Doc Rivers to find the best possible replacement.

Jordan has been known to make boneheaded mistakes throughout his career, often becoming the butt of jokes around NBA social media. It may not be Javale McGee level stuff, but it’s close.

So, when fans saw Jordan’s name pop up in the lineup, they weren’t exactly happy.

Fans took to Twitter to bash both Jordan and head coach Doc Rivers. It began in pregame as folks were stunned with seeing the veteran in the starting order.

Deandre Jordan is in the Sixers starting lineup tonight

Sixer fans checking their phone and seeing that DeAndre Jordan got the start pic.twitter.com/5bpNRwWfo5

Starting DeAndre Jordan is like the Heat starting Erick Dampier. . . at his current age (46).

Things got worse once the game began, with the Sixers falling behind early. Jordan’s poor play was definitely a contributing factor.

In four minutes of play, the center has two points, two turnovers, and a foul. His plus/minus of -12 is far and away the worst on the team.

No clue why Doc started him. 😂 pic.twitter.com/PoCSvtV7Ri

Philly managed to be a more than respectable +4 in the 8 minutes DeAndre Jordan wasn’t on the court.

Unfortunately, they were a predictably horrific -12 in the 4 minutes he played, so they’re down 8.

At the halftime break, Philadelphia leads by a score of 51-50. Jordan hasn’t seen the floor since the 7:48 mark in the first quarter. We’ll see if the Sixers are able to hang on to this lead in the second half. Doc Rivers might think twice before throwing Jordan back on the floor.