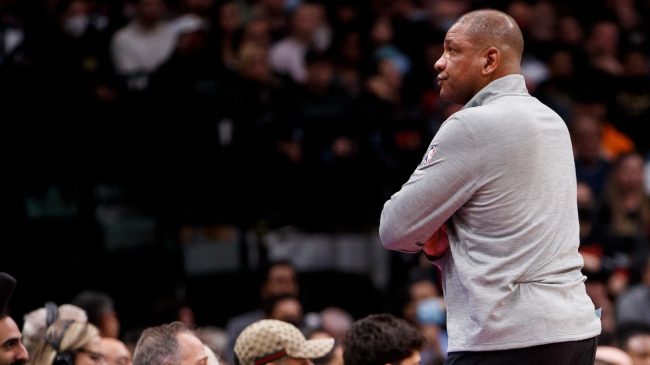 Early reports began to surface saying that the Lakers were targeting Rivers to be their next head coach following the firing of Frank Vogel. Those talks began to heat up after the 76ers saw an early exit from the NBA playoffs, losing a series to the top seeded Miami Heat.

With questions surrounding the status of Rivers’s job security, many wondered whether the head coach would be moving across country for another stint in LA.

Philly appeared to end speculation when President Daryl Morey stated that Rivers would return next season despite the second-round postseason loss.

A new report, however, is now bringing that uncertainty back to the forefront.

The Lakers are zeroing in on coaching candidates, but aren’t abandoning hope on Doc Rivers

New insight from NBA beat writer Marc Stein suggests that the Lakers have not given up hope on landing Doc Rivers. Even with Philadelphia stating publicly that they plan on bringing Rivers back, the door still appears ever-so-slightly open.

Los Angeles is still moving forward with the search process, and it looks like three finalists are rising to the top. Those are Darvin Ham, Kenny Atkinson, and Terry Stotts.

Still, should Rivers become available, it seems that the Lakers will make a move to land him.

Not all fans are happy with the thought of having Doc Rivers in Los Angeles. In fact, many Lakers just want the door to be shut completely so that the organization can move in a different direction.

Why are the Lakers so desperate for a bad coach? I don't get it https://t.co/M3aqJlbejB

@Lakers doc rivers is NOT the answer. Open your eyes you blind stupid bastards

Fans in Philly, though, wouldn’t be so torn up about seeing Rivers leave.

A whole lot of posturing from both sides but I can’t imagine Daryl Morey is as sold on Rivers as he publicly states https://t.co/vaIjonfyIv

Thoughts of a possible trade between the two sides have arisen, which might not be a bad deal for either team. Los Angeles can get their top target and the 76ers can add something to their organization.

We’ll have to wait and see how this unfolds over the offseason. For now, though, it looks like Rivers’s future is far from set in stone.