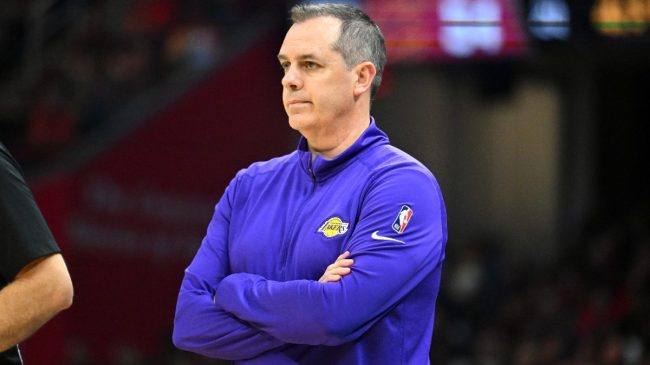 The latest out of Los Angeles hints at a coaching change come season’s end.

Reports began to surface Tuesday afternoon about the planned firing of head coach Frank Vogel following the conclusion of the season. A search will begin immediately for Vogel’s replacement.

DEVELOPING: The Lakers are expected to fire head coach Frank Vogel at the end of the season, per @JakeLFischer.

The Lakers added superstar Russell Westbrook in the offseason, establishing their own form of the “Big Three” on the West Coast. Westbrook joined LeBron James and Anthony Davis in LA, making the Lakers the preseason betting favorite to land an NBA championship.

Those championship aspirations have not come to fruition.

Instead, the Lakers sit 16 games below .500 on the year and are in danger of missing the playoffs altogether. Los Angeles sits in 11th place in the Western Conference standings, needing to make up three games on the Spurs in the season’s final four matchups.

The move seems a bit premature seeing as Vogel helped lead the Lakers to an NBA title just two seasons ago. In three years with Los Angeles, he’s posted a 125-96 overall record. He’s made two postseason appearances, including that championship run in 2020.

He’s also had to manage key injuries to both Davis and James which had significant impacts on the outcome of the campaign.

This year obviously hasn’t gone according to plan, but many around the NBA believe that the blame is better placed somewhere else.

While the head coach rightfully lands some of the criticism for the poor performance, things are a bit different in Los Angeles.

Star player LeBron James calls the shots as much as the front office and coaching staff. That’s been made clear with recent reports noting that James was responsible for the team’s signing of Russell Westbrook as opposed to All-Star DeMar DeRozan.

At times, his opinion seems to outweigh the rest of the organization’s which is causing fans to place some blame on LeBron rather than Vogel.

Deja Vu. This worked out horribly for the Pacers.

Vogel yet again a scapegoat for an underperforming team. https://t.co/VNgSHvMAj0

lol – LeGM strikes again. Lakers are finished, Lebron is done. One of the worst situations in the league https://t.co/UoDqATvKLT

Not his fault tho https://t.co/SUyva0TGLC

They firing him like he’s the problem lol https://t.co/0T6uptKvW2

Crazy because it’s not his fault that the entire team was mortgaged for Westbrook. https://t.co/EkgpGWgiT9

Frank wasn’t the problem, the problem is Lebron. Dude wanted Westbrook over Buddy hield and Demar

LeBron pulls the GM move by begging for Russ. They lose Caruso and Kuzma as a result — don't have the money for DeRozan who wanted to be a Laker. The team is then loaded with old guys who can't shoot and now it's Vogel's fault? lmao. LeBron has mastered screwing people over.

When will they fire LeBron for ruining the Lakers future and failing to succeed with them?

Speculation is already growing as to who the new coach in Los Angeles will be. We’ll see how quickly the team moves on finding Vogel’s replacement this offseason.