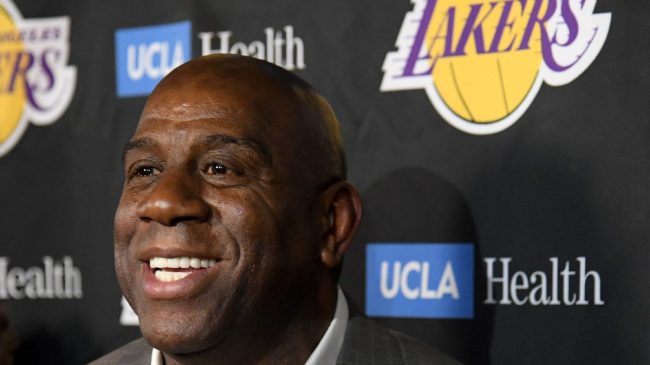 The Los Angeles Lakers made quite a splash this offseason by signing Russell Westbrook.

The addition seemingly made the Lakers an NBA title contender with Westbrook joining forces with stars LeBron James and Anthony Davis.

Unfortunately, it hasn’t quite worked out for Los Angeles.

The team sits 16 games below .500 and is in danger of missing the playoffs completely. As of now, LA is in 11th place in the Western Conference with just four games left to play. They trail the Spurs by two games for the final postseason slot.

And Russell Westbrook has been the target of more criticism than praise following what’s been an inconsistent season.

While Westbrook is averaging 18.4 points per game, he goes through stints where he can’t seem to make a shot. Combine that with a team-leading 293 turnovers, and he’s been an easy player to blame for the Lakers’ struggles.

On Monday, news broke that Los Angeles could’ve had a different star on the roster, but that one key player was influential in bringing Westbrook to the West Coast instead.

Magic Johnson appeared on Get Up Monday morning to talk about the Lakers. He dropped a bombshell regarding the process behind adding Russell Westbrook to the team.

Johnson says that the Lakers were ready to bring DeMar DeRozan to Los Angeles instead of Russell Westbrook, but that LeBron James intervened.

.@MagicJohnson says the Lakers could’ve had DeRozan, Hield and Caruso instead of Westbrook 👀

"If you sign DeRozan, you only trade Kuzma for Buddy Hield, we would be playing in the Western Conference championship this year with those two guys." pic.twitter.com/hZ7DdPhWu1

“The blame that [LeBron] has to take is that DeRozan ended up in Chicago and not with the Lakers. DeRozan wanted to play for the Lakers… and we could’ve made that deal. Well, when Russell, LeBron, and them started talking, that’s when they nixed that deal and went with Westbrook.”

Magic goes even further to not only blame LeBron for missing out on DeRozan, but also for the team’s possibly missing out on the playoffs. Not only would the Lakers have added a key piece in DeRozan, but they would’ve been able to keep players like Kentavious Caldwell-Pope and Alex Caruso.

“With DeRozan, and you had a chance to keep the role players Caruso and KCP, all those guys who are our best defenders… If you sign DeRozan, you only trade Kuzma for Buddy Hield, we would be playing in the Western Conference Championship.”

Considering what Los Angeles has been through this year, it has to hurt knowing that DeRozan could’ve been a Laker.

DeRozan is averaging a career-high 28 points a game for the Bulls this season, helping guide the team to 45 wins. Chicago is safely in the playoff picture, sitting at fifth in the East.

Los Angeles, on the other hand, will try to make up some ground over these last four games. Their postseason window is closing fast, and LeBron James could be to blame.