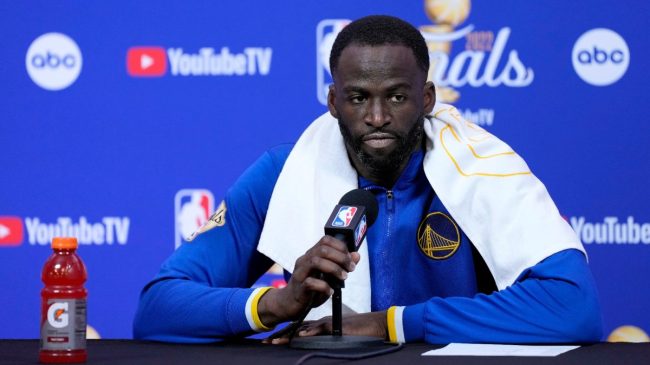 Draymond Green is catching a little heat for one particular play in Game 5 of the NBA Finals. A clip showing Green passing up a wide-open dunk is now going viral.

The video shows Green catching a pass under the basket, but rather than throw down an emphatic slam, he immediately dishes it out to Andrew Wiggins for a three. It looked like a game of hot potato he got the ball out of his hands so quickly. Had Green even turned to look at the rim, he would’ve seen the unobstructed lane to the hoop.

Draymond Green did not even think about shooting 😳 pic.twitter.com/d6a7FS01cO

Wiggins would clank the three off the side of the rim resulting in an empty trip for the Warriors.

With Green’s shooting woes over the first four games of the series, fans are now saying that he wants nothing to do with getting the ball in the basket.

In fact, many are now comparing him to another NBA star that’s caught flak over the last few years for his hesitance to shoot.

A number of fans immediately compared Draymond Green to Ben Simmons, who got crucified for doing the exact same thing in the 2020-21 NBA playoffs.

Check out the social media reaction.

ben simmons changed the game let’s talk about it https://t.co/4UHJdOg6xH

This is Ben Simmons lite https://t.co/RPImpYmvi2

Despite the slip up, the Warriors were able to win Game 5 to take a 3-2 lead in the series. And Green had his best showing, notching 8 points, 8 boards, and 6 assists. That helped him best the projected totals set by the Vegas oddsmakers.

Golden State is now just one game away from an NBA championship. We’ll see if Green and Co. can finish the job over the next game or two.