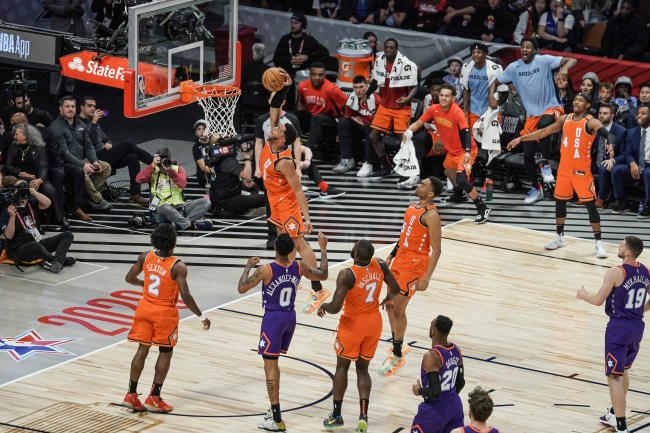 This was a pretty successful NBA All-Star Weekend in Chicago. Despite the Slam Dunk Contest ending with Aaron Gordon getting absolutely robbed, the new NBA All-Star Game rules were generally considered a resounding success.

Prior to the game, ESPN grabbed some of the NBA Rising Stars and quizzed them on trivia from the 90s. I wasn’t prepared to feel old as fuck today but here we are. Miami’s Tyler Herro who didn’t make an appearance on the court for Team USA (foot injury) doesn’t even know how Missy Elliott is.

It’s not that I spend any amount of time thinking about Missy Elliott. I hadn’t even remembered she’s alive until I saw this video. But holy shit man, how have you never seen this video???

We played Name the 90's with the NBA Rising Stars …

Can someone let Tyler Herro know about the legend that is @MissyElliott, please? pic.twitter.com/TOmNhWnF1t

I get it. MTV pretty much stopped showing music videos in the 21st century and Missy Elliott is now 48 years old. But it still hurts to feel so ancient. I’m going to need to self-soothe with a warm glass of milk and a nice Werther’s Original after watching that clip.

And even if you were born after Full House went off the air that shit was 100% on reruns and the Olsen Twins grew up as A-List Celebrities. There’s really no excuse for not recognizing that one immediately. At least that’s what I’m going to tell myself…

If you missed the NBA Rising Stars Game you can check out the highlights here:

The future of the NBA looks bright.