A Modest Proposal: Every NBA Three-Point Contest Should Feature Someone Who’s At Least Seven-Feet Tall 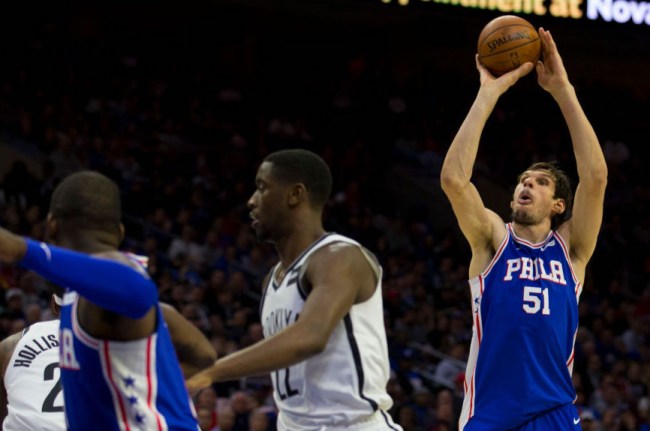 Virtually everyone who played basketball as a kid at one point or another dreamed of eventually playing in the NBA, and while hard work and dedication certainly play a major role when it comes to achieving that goal, there’s one uncontrollable factor that can give you a sizable advantage: being gifted with a freakish amount of height.

Both of my parents are pretty tall, and early on in life, it became pretty clear that I was destined to one day tower over most of the general population. As a result, I was introduced to basketball at an early age and most of the teams I played on before I entered high school relied heavily on an offensive strategy that involved getting me the ball in the paint because most of the kids I played against were too short to reach the rock when I put it over my head.

When my perpetual growth spurt finally stopped, I’d peaked at a height of 6’10,” but thanks to a combination of lack of motivation and terrible joints, my time playing basketball competitively had come to an end by the time I entered college.

As a result, the closest I’ll ever come to knowing what it’s like to be a professional basketball player is the experience I had when I snuck into the NBA Draft in 2015, and based on how that night played out, those guys have a pretty wild life.

This weekend, the league will hold another annual gathering in the form of the various festivities surrounding the All-Star Game that will take place in Chicago on Sunday.

However, I’d argue the real draw is the events that will occur on Saturday night, which is when fans will be treated to the Skills Challenge, the Three-Point Shootout, and the Slam Dunk Contest.

If my personal experience is any indication, any basketball player who is labeled Certifiably Tall at an early point in life is tasked with developing their skills in the paint by partaking in endless Mikan Drills, perfecting the art of boxing out, and looking on in envy as their teammates get to practice jump shots from areas of the court they’re essentially forbidden to wander out to.

As a result, you’re not going to find many big men who make a name for themself thanks to their ability to snipe from behind the arc.

However, much like there’s nothing football fans love more than watching a fat dude pick up a fumble and run it back for a touchdown, there aren’t many things capable of making a basketball arena go apeshit than watching someone who has almost no business shooting a three-pointer nail a shot from deep.

26 years ago today: 7-foot-7 Manute Bol drains 6 three’s in the first half against the Suns 👀🔥 (via @ESPNNBA) pic.twitter.com/a0gc1vpyNI

As a result, I would like to introduce a modest proposal to the NBA to make it’s Three-Point Contest a little more electric: have one guy who’s at least seven-feet tall take part in the competition every year.

It’s happened before; in 2006, Dirk Nowitzki—who stands at an even 7’0″—got the nod and managed to outdo the likes of Ray Allen and Gilbert Arenas on his way to winning the entire thing, making him the tallest person to ever take home the trophy.

The NBA gave Dirk the chance to have one final hurrah last year, and while he failed to come out on top that time around, he still managed to hold his own and finished ahead of multiple competitors—including Steph Curry.

The old man has still got it! 👌🐐 #MFFL #NBAAllStar #DirkNowitzki #MtnDew3PT

You could argue my proposed rule change would turn the contest into a spectacle but that would also require you to argue that it isn’t one already.

Look, I’m not saying you should throw Tacko Fall out onto the court and hope for the best but who among us wouldn’t tune in to see if Boban Marjanovic—who’s made 36.8% of the three-pointers he’s shot over the course of his career (I’m going to conveniently ignore the fact that he’s made a grand total of seven)—could pull off the upset.

Let’s make it happen, Adam Silver. You can thank me later.