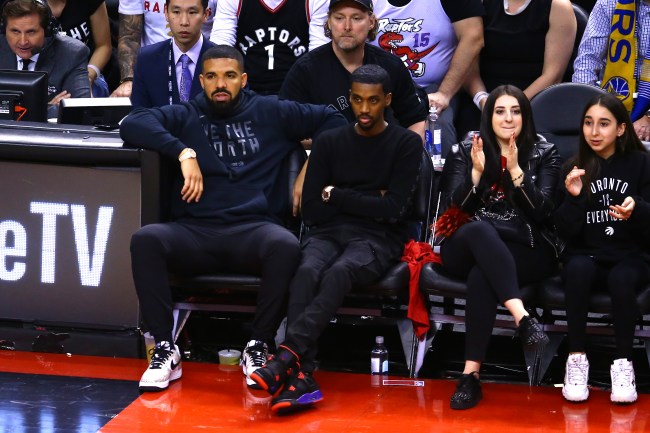 “Pride goeth before destruction, and an haughty spirit before a fall.” -Austin 3:16

It was a near inevitability that the Warriors would tie up the NBA Finals in Game 2, as history has shown that you have a better chance of getting down a sleeve of saltines after a bong rip than the Warriors losing back-to-back games.

And you had to expect that Drake, the dude who in Game 1 trolled Steph Curry, called Draymond “trash” and was more eccentric on the sidelines than Richard Simmons, would get his.

Luckily for NBA Twitter, the Raptors loss came with some Renaissance painting-esque photos of Drake looking sad in key moments upon realizing that the Warriors were doing Warrior things and storming back to tie the series. Please enjoy them as much as I did.

Steph Curry and Quinn Cook celebrate in front of Aubrey Graham as Marvin’s Room plays in the background pic.twitter.com/FGl1vOb0e5

I see you Drake… I see you 😂😂😂
💙💛💙#DubNation #NBAFinals pic.twitter.com/kDsEfMKrB1

Drake looking at Iggy after the Raptors and the Warriors game. pic.twitter.com/1uZAonEcuY

It was on this day Drake learned Quinn Cook’s name pic.twitter.com/mksVXiko7b

Drake in the Warriors locker room after they tied the series…💀💀💀💀 pic.twitter.com/83TJWMV7h8

Drake after game 1 vs Drake when the Warriors win the series #NBAFinals pic.twitter.com/roc0rZHlXK

Rest in peace, Drizzy. This tweet was the fatal blow.

I pray to the meme gods that Drake is present for the games in Oakland.