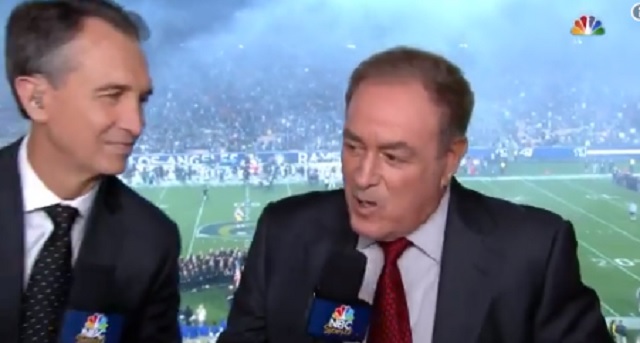 I’m not sure how long Chris Collinsworth has been sliding in to introduce himself during Sunday Night Football broadcasts but for the past month or so I’ve been obsessed with watching him do it.

Collinsworth Slide-In December 9th Bears v Rams. I legit pitched a tent in my corduroys watching this slide. The speed was there. The beige quarter zip was there. The handling of the mic in his right palm MID SLIDE made me blow a fucking gasket. 9.4/10 pic.twitter.com/iwNV7j6cID

Which spawned this excellent meme.

Before tonight’s Rams-Eagles game, NBC decided to have fun with the audience and had Collinsworth slide in from the left side of the screen instead of the right side.

The Internet enjoyed Collinsworth throwing a curve ball and mixing it up with his slide in.