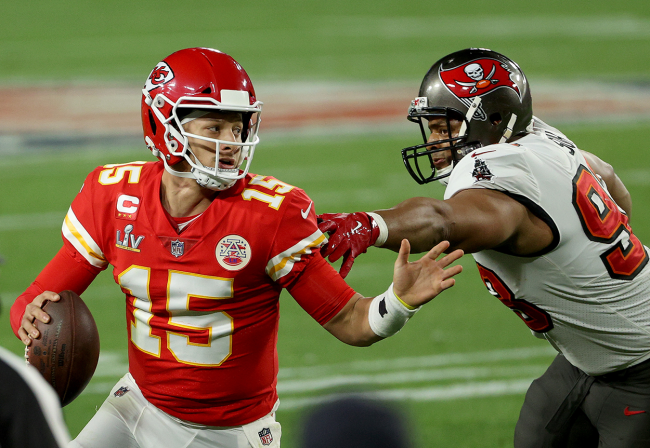 Ndamukong Suh is entering his 13th year in the NFL this fall. Although it is unclear where he will be playing, the former No. 2 overall pick is not planning on retirement.

Suh is looking for the next team that gives him an opportunity to make more sacks. Especially against five particular quarterbacks

Over the course of his first 12 years in the league, Suh has played 191 games. He has recorded 70.5 sacks in that period of time.

Of those sacks, Suh enjoys a few of them more than others— starting with his first-career sack on September 12, 2010 against the Chicago Bears. The 6-foot-4, 313-pound defensive tackle joined NFL Live on Tuesday and revealed the five quarterbacks that he enjoys sacking the most.

The list is totally all over the place, but it includes some of the best quarterbacks to ever do it. Here are the five quarterbacks that Suh likes to sack the most in order:

Now, Mahomes is interesting because Suh has only played against him on four occasions and his stat lines against the Chiefs is not particularly impressive. In fact, it is rather confusing as to how he could list Mahomes first.

Suh has never recorded a sack against Mahomes in his three regular games against the 2017 first round pick. He has only the one (and a half) in his career and it came against a beat-up offensive line.

Based on his list, that means that Suh’s favorite sack of all-time was in Super Bowl LV.

Maybe that’s why he’s his favorite to sack? Because Mahomes is so elusive? Because it came in the Super Bowl?