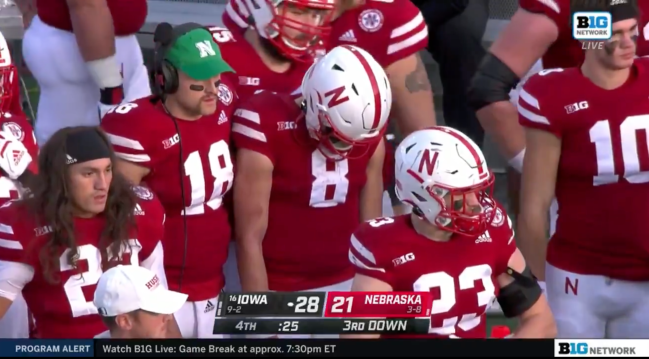 Earlier this week, Nebraska quarterback Adrian Martinez underwent shoulder surgery and effectively ended his season. In his place, redshirt freshman Logan Smothers got the start on Friday for the Cornhuskers’ rivalry game against Iowa.

Smothers, who was a four-star recruit, played pretty well. He completed 16-of-22 pass attempts for 198 yards and ran for two touchdowns.

However, he also threw an interception and lost a fumble. Nebraska, which held a 21-6 lead early in the third quarter, allowed Iowa to score 22 unanswered points and win the game by seven, 28-21.

Thus, they are both the best three-win team of all-time and the most three-win time in the history of the beautiful game. It’s remarkable how unfortunate of a season that Nebraska endured.

After Friday’s game was all-but over, Smothers was visibly upset. He had his head down into his chest on the sideline until his teammate came over to get him right.

Junior offensive lineman Trent Hixson walked over to his distraught signal-caller and pushed his helmet up, making sure that he left the field with his head held high.

Although Nebraska’s season did not end how they had hoped, this display from Hixson is a testament to the culture that is being built in Lincoln. What a moment!