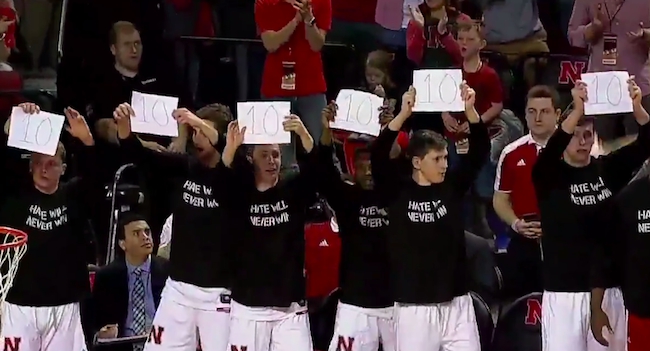 If you’re a college basketball player who only gets to step onto the court during garbage time, you automatically take on the role of hype man for your more talented teammates. While this traditionally involves twirling a towel around your head and screaming “LET’S GO!!!!!” after a big play, some people have used their time on the bench to figure out a way to take things to the next level.

Over the course of the current season, no one has celebrated their team’s on-court achievements like the backup players for the Nebraska Cornhuskers men’s basketball team. They put themselves on the map earlier this month when they channeled their inner entitled rich kid with a crew-themed celebration, but they were only getting started.

They followed it up a few days later when they pulled out the Macarena after a go-ahead three in a game against Maryland (if you’re in the mood to feel old today, it’s worth noting none of the players doing the dance was alive when the song came out).

The @HuskerHoops bench mob is at it again.

However, the Cornhuskers absolutely outdid themselves during last night’s win over Indiana with a wide variety of celebrations including tributes to the Winter Olympics and last weekend’s NBA dunk contest— complete with signs they’d made in preparation for a monster slam.

The @HuskerHoops bench mob never rests, and they've been at it all night once again: pic.twitter.com/tWaOX4mkDX

Nebraska only has one regular season game left before the Big Ten Tournament kicks off, and while the team is currently on the March Madness bubble, I can only hope they make the cut in order to see what their players pull out once they reach the big stage.