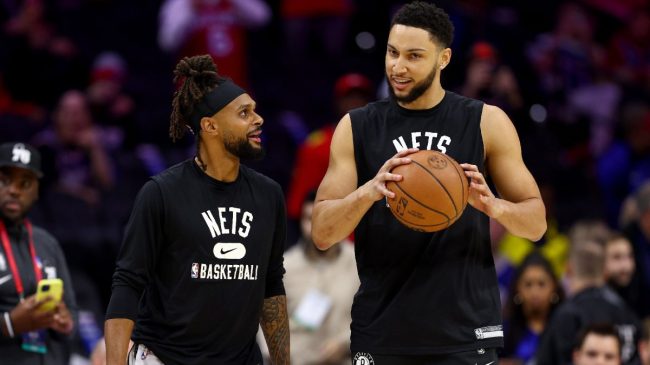 A new report has surfaced stating that the Brooklyn Nets tried to get Ben Simmons to play in the NBA playoffs.

After sitting out the entire year due to mental and physical hurdles, the team was hopeful that the star would make his debut in the opening round of the postseason.

That, unfortunately, did not happen and the Nets saw a quick exit with a sweep at the hands of Boston. Simmons successfully sat on the sidelines for an entire year without ever stepping foot on the court.

The midseason trade for the former first round pick did not pay off for Brooklyn, as they’re asset never played a minute. This after giving up one of the team’s top scorers in James Harden.

Now, the organization will have to watch Harden move through the playoffs with the 76ers while the Nets sit at home.

Simmons was a mainstay on the Brooklyn bench, but his absence from the court wasn’t from the Nets’ lack of trying.

NBA insider Shams Charania reports that the team attempted to convince him to play, even if that meant limited minutes, but the superstar couldn’t show the resolve.

Ben Simmons told Nets leadership that a mental block for him to play is creating stress as a trigger point for his back issues, per @ShamsCharania

Nets players and coaches wanted Simmons to show “resolve” and play in this series, even if it was for limited minutes. pic.twitter.com/NnV7xvaSEI

Simmons cites a “mental block for him to play” as having been the issue, which is now causing stress and triggering the back injury that’s been hindering him this season.

That mental block must have resurrected his back soreness the night before Game 4, because most believed he’d make his debut with the Nets trying to avoid a first-round sweep.

Simmons has stated his desire to remain in Brooklyn and play for the Nets at some point. Time will tell if that moment comes.