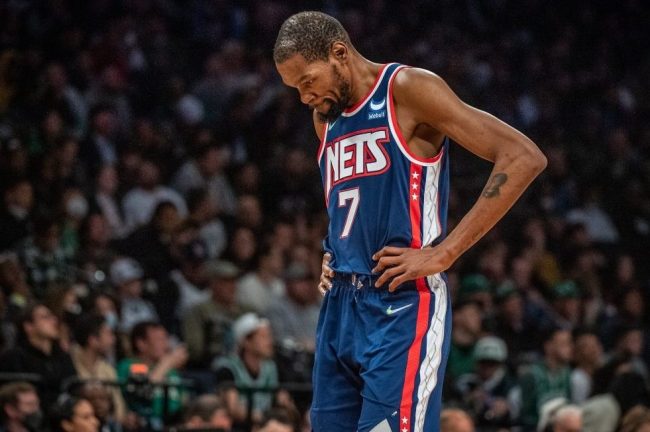 The Brooklyn Nets have been trying to trade Kevin Durant for quite some time now and it sounds like everything is at a standstill. Brooklyn isn’t willing to deal away its superstar without receiving a massive haul. Meanwhile, Durant has given his team an ultimatum the front office refuses to agree with. We’ll see how it plays out, but as of now we at least found out why trade talks have stalled.

According to Brian Windhorst, neither the Nets nor Kevin Durant has any leverage in trade talks. Teams aren’t offering what the front office is looking for. Meanwhile, Brooklyn won’t play Durant’s game and fire Steve Nash and Sean Marks. For that reason, trade negotiations have entirely stalled.

.@WindhorstESPN on Kevin Durant's status with the Nets:

The Nets may finalize a deal in the coming months as the 2022-23 season is nearing. However, based on the offers they’re receiving, the front office might have to convince Durant to stay in Brooklyn. That will be difficult to achieve, as Kevin Durant is adamant about playing for a new franchise.

This organization has dealt with dramatics ever since they acquired Kyrie Irving and Kevin Durant. Many believed that Irving would be traded by now but it sounds like the two sides have come to an agreement. That might be the best move for Durant right now, as he would at least get to play alongside Irving again.

Keep an eye on this situation. NBA training camp is set to kick off soon. The Nets would likely enjoy trading Kevin Durant sooner, rather than later. However, they’re likely to shop the superstar forward until a deal can be reached.