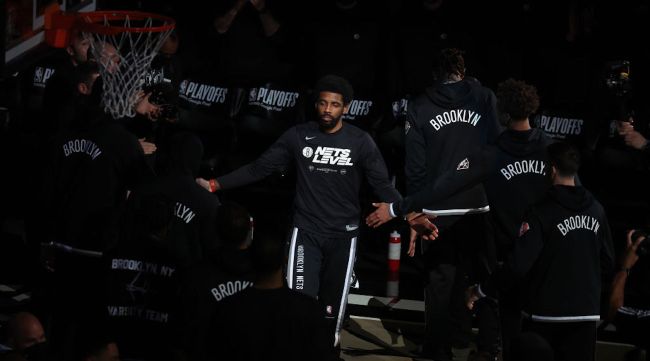 There is no other way to slice it: the Brooklyn Nets 2021-22 season has been nothing short of a colossal disappointment.

Heading into the season, the Nets — then armed with the talents of Kevin Durant, Kyrie Irving, and James Harden — were the betting favorites to win the NBA title with odds of +225 to lift the Larry O’Brien trophy. Those aspirations have since evaporated into thin air, though, as the 7th-seeded Nets are currently down 0-3 to the clearly superior Boston Celtics and are on the verge of being swept out of the first round.

The Brooklyn Nets record with and without Kyrie Irving

The turning point in the Nets season, of course, came in mid-January when mercurial All-Star point guard Kyrie Irving rejoined the team after seemingly endless months of discourse surrounding his immunization status.

Now, if you look at Kyrie’s contributions from a strictly statistical perspective, then perhaps you could make a case that the Nets’ precipitous drop in form is unrelated to his return. In 29 total regular-season games, Irving averages 27.4 points — the highest of his career — along with 5.8 assists and 4.4 rebounds per game. There are many things about Kyrie that can be questioned but his talent is not one of them: the man is a superstar.

But, as we know, sports — despite how the analytics nerds may try (and are largely very successful at because analytics are the future of sports, I get it) — aren’t a purely binary, data-driven prospect. There’s a reason phrases like “it factor” and “clutch gene” are staples of sporting lexicon. It’s why quarterbacks are often hailed for their “intangibles.” It’s undeniable that the unquantifiable is often as relevant as the tangible and the tactile.

And the fact of the matter is that, for whatever reason, the Nets’ season flipped with the return of Irving. The James Harden trade, of course, is a factor, but there’s been speculation that Harden wanted the trade because of Kyrie’s behavior, anyway. Bringing in apparent con-artist Ben Simmons certainly didn’t help the situation, either. But when you introduce an All-World talent like Kyrie Irving into your alchemy, it’s going to change your solar system’s gravity. The Ewing Theory tries to explain how and why teams sometimes seem to improve when they lose their star player. Perhaps The Irving Theory represents the exact opposite of that.

Irving, Kevin Durant, and the rest of the Brooklyn Nets will look to stave off elimination and the end of their season tonight in Brooklyn with Game 4 against the Celtics set to tip-off at 7 p.m.