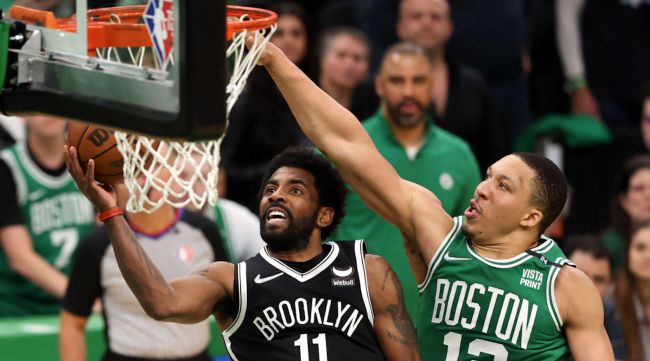 After dropping 39 points in a losing effort in Game 1 against the Boston Celtics, Kyrie Irving had just 10 points in Game 2 and he and the Brooklyn Nets went down 0-2 in the first-round series.

Following years of playoff dominance with LeBron James and the Cavaliers, Irving’s playoff life has been much different ever since leaving Cleveland, as his postseason winning percentage has dropped by nearly 20%.

Courtesy of Basketball-Reference, I was able to do some calculations on what the picture of Kyrie’s postseason career looks like with and without LeBron James, inarguably one of the greatest basketball players of all time. The pair, of course, won the 2016 NBA Finals together, famously coming back from 3-1 down against the loaded Golden State Warriors.

As a member of the Cleveland Cavaliers, Irving played in 59 postseason games, including those famed NBA Finals matchups between the Cavs and the Golden State Warriors. Of those 59 games, Kyrie and the Cavs won 43 of them, which is good for a winning percentage of about 73%.

Since leaving the Cavs, though, and heading to Boston and Brooklyn, Kyrie’s postseason record looks much, much different. Over his years with the Celtics and Nets, Irving has played in just 20 playoff games, winning 11 of them, which equates to a winning percentage of 55%. He’s also yet to advance past the Eastern Conference Semifinals after appearing in six total Eastern Conference Finals and NBA Finals with Cleveland.

Let this be yet another reminder that the grass isn’t always greener on the other side.