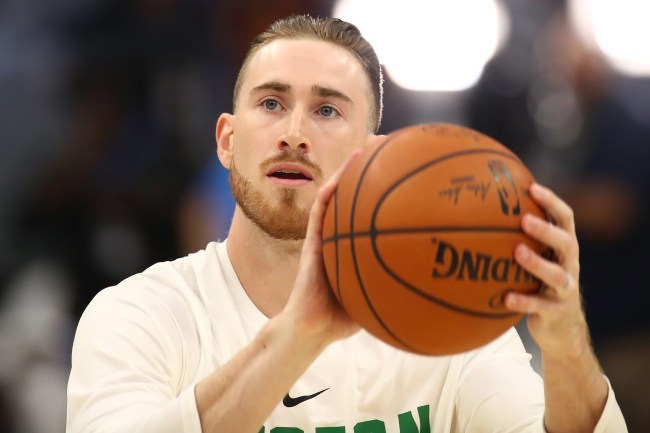 New Balance: That balding dude at the YMCA whose wife made him get a gym membership because none of his pleated khakis fit anymore and calls fouls just to catch a breather.

New Balance is looking to make a return to the hardwood since, well…

Never forget that Matt Bonner was, at one point, the only NBA player exclusively sporting New Balance every night. pic.twitter.com/X8BTsbAwAL

It is conceivable that the next generation of hoop stars could be rocking Newbies, as industry expert Nick DePaula claims the company is targeting top players when their endorsement deals expire. Toronto Raptors star Kawhi Leonard and 76ers center Joel Embiid are just a couple of the big bucks New Balance is hunting, but footwear manufacturer is reportedly most bullish on signing Celtics guard Gordon Hayward, who has spent the majority of his career playing in the Nike Hyperdunk 2017 Lows.

“One company with strong interest in Hayward is New Balance, which would look to re-launch its dormant basketball category with the Celtics star. The company’s commitment to re-engage in hoops isn’t entirely a secret, as it recently partnered with the Celtics on the team’s new 70,000-square-foot Auerbach Center, the franchise’s new state-of-the-art training facility.”

Currently, the New Balance doesn’t even have a section on its website for basketball sneakers.

If you think New Balance is taking a risk on Hayward, who had a gruesome leg injury six minutes into last season, fear not, he’s getting back to All-Star form…

PUMA and AND1 are also looking to “re-engage on the pro stage,” but as ESPN’s Darren Rovell points out, it is an expensive game to play.

New Balance looking to get back into basketball and might look to Gordon Hayward, reports @NickDePaula. Expensive game to play. Brand making huge strides using women track & field stars to push product on Instagram. Pay entire roster half of what it would cost for Hayward. pic.twitter.com/UlchCJpgLg

The sneaker landscape in the NBA in the coming years could get lit.