Remember When The New England Patriots Came Real Close To Becoming The St. Louis Stallions In 1994? 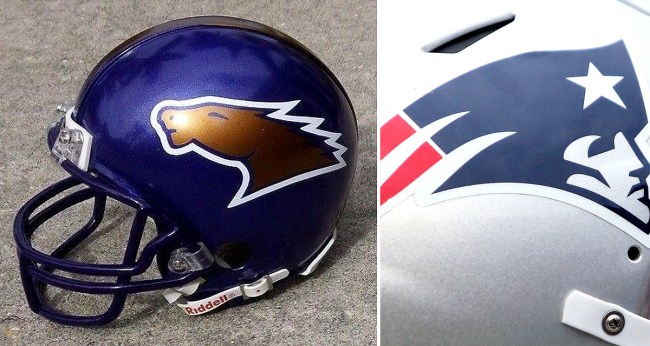 Hard to believe considering the dynasty the team has become since, but in 1994 the New England Patriots came real close to becoming the St. Louis Stallions.

In fact, the Patriots came so close to becoming the Stallions that the team had an official logo and everything.

Yep, “The Hoodie” Bill Belichick could have been winning all those Super Bowls with quarterback Tom Brady in St. Louis rather than New England if James Orthwein, the man who bought the Patriots from Victor Kiam in 1992 had his way.

Orthwein, a St. Louis native, bought the Patriots in 1992 with the specific idea of moving the team to the city in which he was born and raised following the 1993 season and having them play in the brand-spanking new Dome at America’s Center, replacing the Cardinals who left the city for Arizona in 1988.

There was just one problem, and it was a big one.

Some guy named Robert Kraft owned Foxboro Stadium, where the Patriots played their games, and the team had a lease that ran through 2001.

Not that fans were visiting the stadium much with the Patriots going 1-15 in 1990 and 2-14 in 1992. Things would soon change, however, as Orthwein had hired a guy named Bill Parcells to be the team’s new head coach.

It was at that point Orthwein had a choice to make. Keep the team in New England and perhaps suffer through more years of terrible attendance, sell the team, or convince Kraft to let the team out of its lease.

St. Louis Stallions T-shirt. Twice proposed team in St. Louis. First as an expansion team and then as a potential landing spot for a relocated New England Patriots. pic.twitter.com/oknqGAiusP

I had no idea the New England Patriots were supposed to relocate to St Louis in 1994 and become the St Louis Stallions. Robert Kraft prevented the move by enforcing the Foxboro stadium lease. All those Super Bowl trophies we missed out on…..! pic.twitter.com/uvxEYhnoJN

“People have offered me all sorts of money for the lease,” Kraft said in 1994. “But I let it be known that I wouldn’t sell at any price.”

With no other option reasonably available in his mind, Orthwein ended up selling the Patriots to Kraft for a then sports franchise record of $175 million.

And just like that, the St. Louis Stallions dream came to an end.

Here are some more things regarding the failed attempt at moving the @Patriots to St. Louis, the St. Louis Stallions: pic.twitter.com/72kRsxUDXu

“I’m not going to be the most popular man [in St. Louis],” Orthwein said at the time about selling the team. “I’m going to still do the best I can for my hometown to help them get a team. As far as owning a team, I’m done with that.”

He didn’t have to wait long as the following year the Rams relocated to St. Louis from Los Angeles, who then left the city in 2016.

So what would have happened if the Patriots had become the Stallions?

So much to think about.

And hey, at least St. Louis still has a Wikipedia page and a relatively active Stallions Twitter account!

Why are there people here? We've been waiting four years for people to show up! Hey @nflcommish, there are 30,000 people at the dome! Can we get a game scheduled? @nfl @nflcommish pic.twitter.com/PP7pbdKki2

We're hearing rumors that the @Chargers may want to join us at the Dome. We'd welcome their presence, however, we'd worry about their fanbase since we know what team will always be #1 in the hearts of St. Louis football fans. @nfl @nflcommish #gogogoyoupurplestallions

We apologize for not letting everyone know this earlier, but the @StLouisStallion have a much needed bye this weekend. Players are getting some much needed rest. We'll let you know details of our next game once @nflcommish emails us our schedule! @nfl @nflcommish

We just got off another great conference call with @nflcommish's voicemail. We believe we are making great strives! We excitingly await his response to our 74 voicemails! Games coming soon! @nfl @nflcommish

In other news, our team is currently undefeated going into week 5! #gogogoyoupurplestallions @nfl @nflcommish

Well, I've just been alerted that the #NFLDraft happened not one, but two weeks ago.... Unfortunately we never received our invitation in the mail from @nflcommish. Failed by the post office again! Oh well. @NFL @nflcommish