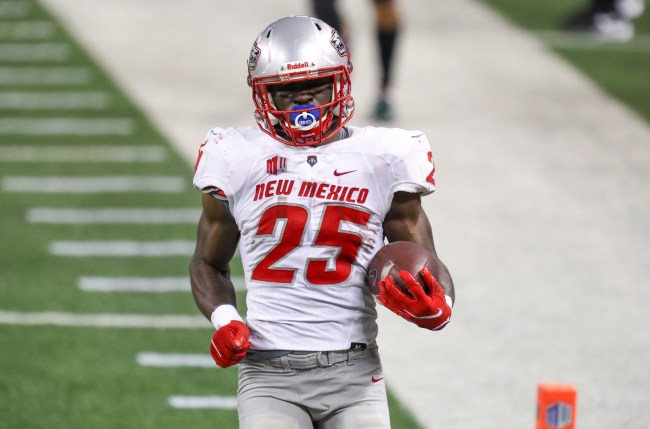 What a long, strange year it has been. When the COVID-19 pandemic hit in March, it was not always a certainty that there would be sports in any capacity, let alone full-contact, amateur football. Nevertheless, college football has prevailed and enters Week 10 of its season this weekend. A lot of cancellations have occurred, and more are surely to come, but the game continues to be played.

For the University of New Mexico, however, that was almost not the case. The state’s governor put a strict rule that prohibits gatherings of more than five people, and that simply isn’t conducive for a college football team to practice or play with over 100 athletes, coaches and staff. New Mexico State University chose not to play as a result, but New Mexico pushed on.

The Athletic’s Nicole Auerbach provided a glimpse into how a season became feasible and it comes up just short of downright crazy. Essentially, the team picked up its operations and moved it over the state line into Nevada on Oct. 30.

Players, trainers, academic advisors and coaches have been housed at the Hilton Lake Las Vegas Resort and Spa in Henderson, Nev. and practices are held at Sam Boyd Stadium, the former home of UNLV before it moved home games to the new Allegiant Stadium this season. Per the report, the fellow Mountain West university has assisted with COVID-19 testing, and all operations as simple as laundry service.

We are live in Las Vegas back to our home in ABq with Lobo Talk! Nice to have the whole gang back together! #GoLobos https://t.co/EOHOlfm5yK pic.twitter.com/GnC9caTTTe

Without the ability to play in their home stadium, the Lobos are playing the entire season on the road. This is the first time in FBS history that a school will play an all-away schedule, and Auerbach notes that even Tulane played a few games in New Orleans after Hurricane Katrina struck the city in 2005.

The Lobos and ⁦@CoachGonzUNM⁩ are in San Jose! #GoLobos #win5 pic.twitter.com/Ai4R9jwNKc

The Mountain West Conference began its season on Oct. 24 and is scheduled to finish up on Dec. 12. That means New Mexico will be housed in Las Vegas for 6-8 weeks when it is all said and done, which will cost the program about $70,000 per week. Totaling at nearly $600,000 for the season, you might ask how that’s feasible.

However, the school will receive approximately $4 million in financial kickbacks from the Mountain West and the College Football Playoffs. While it’s a logistical nightmare, the math adds up, as a number in the ballpark of $3,400,000 is better than $0. New Mexico is 0-2 to begin the year, and will face Nevada, Air Force, Utah State, Wyoming and Fresno State to round out its eight-game, conference-only schedule.