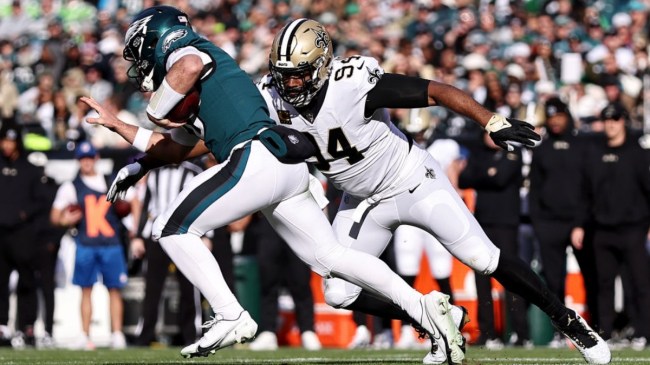 Last season, the Cleveland Browns had one of football’s best pass rushes.

This year, that hasn’t quite been the case.

Now it appears that they’ll be spending the offseason looking for somebody new to play opposite Myles Garrett in the team’s pass rush.

The team sent Jadeveon Clowney home from practice yesterday after he made comments in an interview about the likelihood of him no longer being a member of the Browns after this season. He has since been ruled out for tomorrow’s matchup against the Pittsburgh Steelers in a move that seems to confirm that it’s unlikely he’ll be back next season.

Luckily for the Browns, they’ll have quite a few options to choose from as they attempt to replace Clowney. There are some big names expected to hit free agency after the season ends who could step in to form a new formidable duo with Garrett.

However, it appears at least one Browns fan would prefer for the team to trade for a star that remains under contract with the New Orleans Saints.

Yesterday a fan took to Twitter to ask Saints edge rusher Cameron Jordan if he’d be interested in becoming a Cleveland Browns.

Jordan absolutely shut the idea down and said that there is no amount of money that could get him to join the Browns.

After playing there two games ago… it affirmed my previous notions… No amount of money could get me there 🤢🤢🤢 https://t.co/hLArnZbirm

Jordan playing alongside Garrett certainly would have been an intimidating situation for opposing offenses to deal with. Jordan has had at least 7.5 sacks in 11 consecutive seasons. This season he has 8.5 with a game still to play and last year his 12.5 sacks earned him his 7th Pro Bowl selection.

For now, the only thing we know for sure is that he won’t be joining the Cleveland Browns any time soon.